… and that the USS Liberty was under attack by Egypt:

The press release for the 2002 BBC documentary film Dead in the Water suggests the attack was a “daring ploy by Israel to fake an Egyptian attack” to give America a reason to enter the war against Egypt. Convinced that the attack was real, President Lyndon B. Johnson launched nuclear-armed planes targeted against Cairo from a U.S. aircraft carrier in the Mediterranean. The planes were recalled only just in time, when it was clear the Liberty had not sunk and that Israel had carried out the attack.(Source) 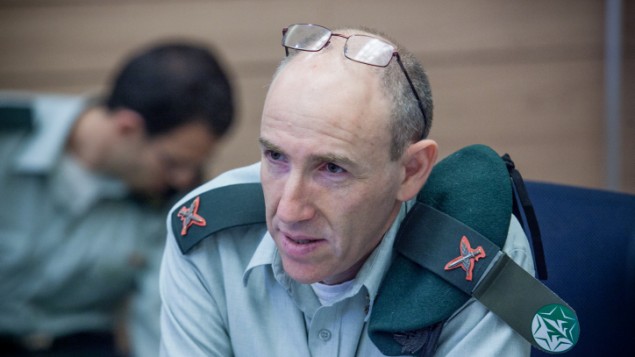 Brig. Gen. Itai Brun, head of the IDF Military Intelligence research and analysis division, at a Foreign Affairs and Defense committee hearing at the Knesset in 2012 (photo credit: Noam Moskowitz/Flash90)

– Israeli intelligence seen as central to US case against Syria (The Times of Israel, Aug 27, 2013):

May these Israeli war criminals get what they deserve NOW.)

While Israel will almost certainly take no direct part in a military strike, Israeli intelligence information is widely believed to have played a central role in enabling the US’s adamant conviction that Assad’s regime fired chemical weapons at civilians outside Damascus last Wednesday, killing hundreds of people and wounding over a thousand, according to Syrian rebel groups.

In Israel, Prime Minister Benjamin Netanyahu held his second meeting in two days with his security cabinet to discuss the Syria crisis on Tuesday afternoon.

“The State of Israel is ready for any scenario,” Netanyahu said after the meeting. “We are not part of the civil war in Syria but if we identify any attempt whatsoever to harm us, we will respond and we will respond in strength.”

Prior to the session, called to discuss the implications for Israel of a possible strike, a top Israeli minister said it would be inconceivable for the international community to allow President Bashar Assad’s regime to continue killing children with chemical weapons.

Naftali Bennett, the minister of economics who sits on the security cabinet, issued what amounted to a demand for military intervention against Assad. “It cannot be that less than 100 kilometers from Israel, children are being gassed to death and we let the world remain silent and ignore it,” Bennett said.

The Israeli team in Washington, headed by Netanyahu’s outgoing National Security Adviser Yaakov Amidror, also includes senior Defense Ministry official Maj.-Gen. (Res) Amos Gilad, the head of the IDF’s Planning Directorate Nimrod Sheffer, and the head of the IDF’s Military Intelligence Research Branch Gen. Itai Brun. It was Brun, the IDF’s top intelligence analyst, who in April shocked the international community by declaring that the army was quite certain that Assad had used chemical weapons against rebel forces in Syria in March.

This time, too, Israeli military intelligence has reportedly played a key role in providing evidence of Assad’s chemical weapons use. On Friday, Israel’s Channel 2 reported that the weapons were fired by the 155th Brigade of the 4th Armored Division of the Syrian Army, a division under the command of the Syrian president’s brother, Maher Assad. The nerve gas shells were fired from a military base in a mountain range to the west of Damascus, the TV report said.

The report did not state the source of its information. But subsequently, Germany’s Focus magazine reported that an IDF intelligence unit was listening in on senior Syrian officials when they discussed the chemical attack. According to the Focus report Saturday, a squad specializing in wire-tapping within the IDF’s prestigious 8200 intelligence unit intercepted a conversation between high-ranking regime officials regarding the use of chemical agents at the time of the attack. The report, which cited an ex-Mossad official who insisted on remaining anonymous, said the intercepted conversation proved that Assad’s regime was responsible for the use of nonconventional weapons.

Giora Inbar, the former head of the IDF’s liaison unit in southern Lebanon, said Tuesday that Israeli military intelligence made a priority of intelligence-gathering in Syria, was very well-informed, and was widely trusted. The United States was “aware of” Israel’s intelligence on the doings of the Syrian regime, he said in a Channel 2 interview, “and relies upon it.”

The New York Times on Tuesday quoted an Israeli official who suggested that the planner of the chemical rocket attack did not intend to inflict such high casualties.

“It’s quite likely that there was kind of an operational mistake here,” the official was quoted as saying. “I don’t think they wanted to kill so many people, especially so many children. Maybe they were trying to hit one place or to get one effect and they got a much greater effect than they thought.”

In his speech Monday, portending US-led military intervention and excoriating Assad’s regime for its “inexcusable” chemical strike, Secretary of State John Kerry stated flatly that “chemical weapons were used in Syria” and indicated that the US had received “additional information about this attack, and that information is being compiled and reviewed together with our partners.”

A statement issued by the White House Monday noted that the Israeli team in Washington also discussed Iran and other regional issues with their American counterparts, and that the meeting was part of a series of regular discussions within the framework of the good relations between the two countries.

A senior Syrian official on Monday issued a first direct warning that if attacked, his country would retaliate against Israel. Khalaf Muftah, a senior Baath Party official who used to serve as Syria’s assistant information minister, said in a radio interview that Damascus would consider Israel “behind the [Western] aggression and [it] will therefore come under fire.”

His words were echoed by Iranian officials, who on Monday shrugged off the threat of a US attack on its close ally Syria, but said that if such a strike were to take place, Israel would suffer.

“[The Americans] are incapable of starting a new war in the region, because of their lacking economic capabilities and their lack of morale,” said Mohammad Reza Naqdi, the commander of the Republican Guards’ elite Basij force.

“No military attack will be waged against Syria,” said Hossein Sheikholeslam, a member of Iran’s Islamic Consultative Assembly. “Yet, if such an incident takes place, which is impossible, the Zionist regime will be the first victim of a military attack on Syria.”

Israeli military officials have indicated they believe it unlikely that Syria would target Israel if the US or others intervened, because an Israeli response could bring down the Assad regime, but Israel has reportedly been taking security precautions just in case.