It was only last week that yet another conspiracy theory became fact when we learned, for the first time after nearly three years of lies, that Tepco had been deceitful and wrong with its “all clear” message about Fukushima, and that instead some 300 tons of contaminated, irradiated water had been flowing into the Pacific ocean every day. So now that the opportunity cost of telling more lies is zero, and the radioactive cat is out of the bag, so to say, the news about the absolute, unmitigated disaster that Fukushima is, and will be for decades, are coming fast and furious. Sure enough, moments ago Tepco reported, and Kyodo confirmed, that radioactive water has risen above the protective barrier and is freely leaking into the surrounding environment. 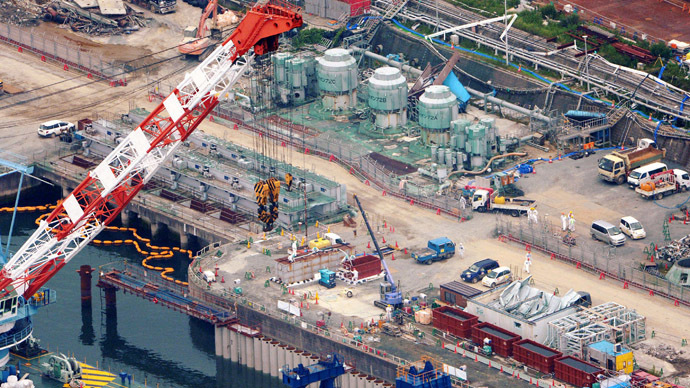 Contaminated groundwater accumulating under the crippled Fukushima nuclear power plant has risen 60cm above the protective barrier, and is now freely leaking into the Pacific Ocean, the plant’s operator TEPCO has admitted. The Tokyo Electric Power Company (TEPCO), which is responsible for decommissioning the damaged Fukushima Daiichi nuclear plant, on Saturday said the protective barriers that were installed to prevent the flow of toxic water into the ocean are no longer coping with the groundwater levels, Itar-Tass reports.

The contaminated groundwater, which mixes with radioactive leaks seeping out of the plant, has already risen to 60cm above the barriers – the fact which TEPCO calls a major cause of the massive daily leak of toxic substances.

Earlier on Friday, the company announced it started pumping out contaminated groundwater from under Fukushima, and managed to pump out 13 tons of water in six hours on Friday. TEPCO also said it plans to boost the pumped-out amount to some 100 tons a day with the help of a special system, which will be completed by mid-August. This will be enough to seal off most of the ongoing ocean contamination, according to TEPCO’s estimates.

However, Japan’s Ministry of Industry has recently estimated that some 300 tons of contaminated groundwater have been flowing into the ocean daily ever since the March 2011 earthquake and tsunami that triggered the disaster.

TEPCO also promised it will urgently reinforce the protective shields to keep radioactive leaks at bay. The company has repeatedly complained it is running out of space and has had to resort to pumping water into hastily-built tanks of questionable reliability, as more than 20,000 tons of water with high levels of radioactive substances has accumulated in the plant’s drainage system.

The other “plan” contemplated by Tepco, as we wrote last week, is to literally freeze Fukushima in a giant ice wall. To wit: “To prevent futher leakage, an underground wall will be built to freeze to the reactor building, the Japanese news agency Kyodo reported. To achieve this, pipes with chemical refrigerants to chill reactors 1 to 4 are being laid in the ground. The thus created barrier was expected to have a length of 1.4 kilometers.” Another brilliant strategy which will likely require its own nuclear power plant to generate the energy needed to keep the ice, well, cold. And one can only imagine at the wonders of mutagenesis that will result when one mixes alpha, beta and gamma rays with nearly a mile of spilled highly reactive coolant. All questions which will be promptly answered after the next, and final, destructive Japanese earthquake.

In retrospect, one can see why Japan no longer cares what happens, and why Abenomics, doomed to failure anyway, is being attempted. After all, what’s the downside?

Finally, for those Americans who think all of this is irrelevant…

[…] A mathematical model developed by Changsheng Chen of the University of Massachusetts at Dartmouth and Robert Beardsley of the Woods Hole Oceanographic Institute found that radioactive particles disperse through the ocean differently at different depths. The scientists estimated that in some cases, contaminated seawater could reach the western coast of the United States in as little as five years. [Ken Buesseler, a senior scientist with the Woods Hole Oceanographic Institution who has analyzed thousands of samples of fish from the area]thinks the process occurs a bit more rapidly, and estimates it might take three years for contamination to reach the U.S. coastline. […]

Luckily by then the richest 0.0000001% will be ready to LBO the entire world courtesy of QE666, and their propaganda media will be mainlining Xanax straight into the veins of over 300 million sheep (or 400 million depending on what happens with “immigration reform”).