– US Banks As Broken As Ever: JPM Excess Deposits Rise To New Record; Loans At Pre-Lehman Levels (ZeroHedge, July 12, 2013):

The final item of note from today’s JPM release is perhaps also the most important one, and once again serves as evidence of all that is broken with the US financial system. To wit: deposits held by JPM rose modestly to a new all time high of $1,202,950 million, or $1.2 trillion. This compares to $970 billion in Q3 2008 at the time Lehman failed. What about the flip side of this key bank liability: loans. As of June 30, 2013, total JPM loans declined from $729 billion to $726 billion, the lowest since September 2012. But more disturbing, this number is $35 billion less than the $761 billion at September 2008. It means that JPM’s excess deposits have now risen to a new all time high of $477 billion, up from $474 billion last quarter. 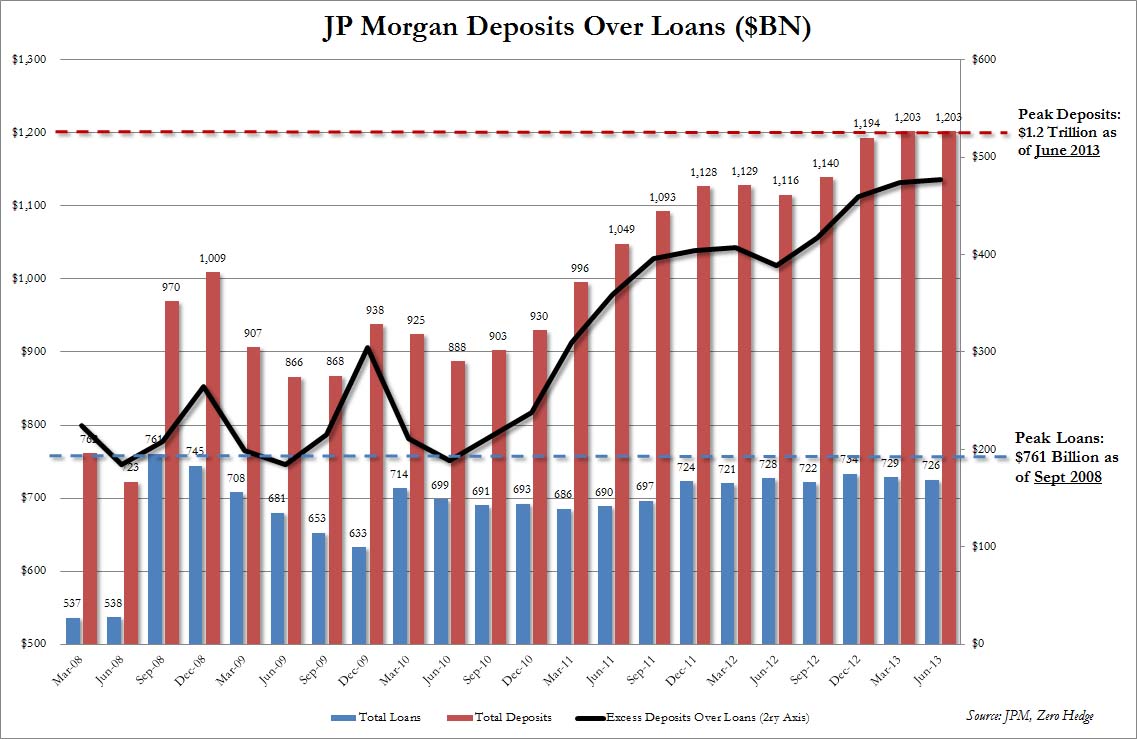 Why is this a problem? Two reasons.

First, as most recall, the way the JPM London Whale office was funded, was by using excess deposits over loans to provide the dry powder and collateral which which Bruno Iksil’s office tried to corner the IG9 and high yield markets. 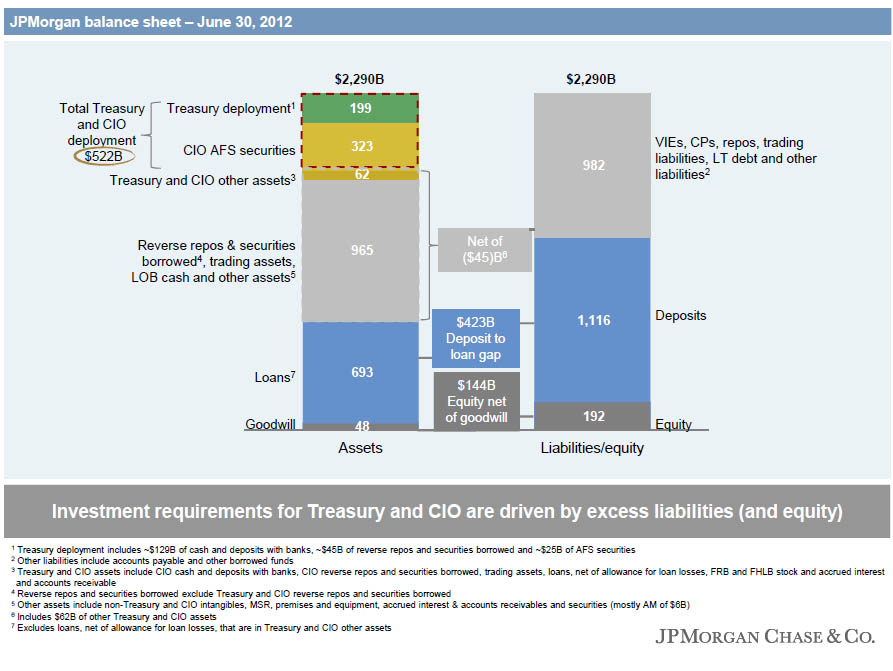 That failed, costing the firm $3.4 billion in Q2 2012 revenue (and oddly enough the CIO generated negative $648 million in revenue this quarter: the biggest loss since the London Whale quarter – what else did JPM blow up this time?). But the bigger issue is: what is JPM investing all this excess cash in? Is it plain vanilla safe treasuries? If so, where on the firm’s books is this nearly $500 billion “investment” accounted for, and where is the loss associated with holding so much duration on the bank’s balance sheet over the past two months?

Second, and just as important, while JPM continues to attract deposits, most of which are merely a matched book entry to account for cash created by the Fed’s excess reserves, where is the loan growth? After all the banks are complaining they can’t be like normal banks. Perhaps instead of perpetuating a broken banking model, in which deposit funding is used not to grow credit money and be reinvested into the economy as loans, but goes automatically into risk assets, JPM can once again start doing what banks have done for hundreds of years: LEND.

Because while deposits have increased by $233 billion since Lehman, loans have dropped by $36 billion since September 2008! And that’s why there is no wholesale (soaring) inflation: the cash deposits are locked into boosting the S&P, instead of growing the economy and broader credit money aggregates.

We understand that JPM generates better returns for its shareholders by simply gambling in the market and using deposits to buy stocks, but at some point this strategy will fail and lead to huge losses. Is Jamie Dimon, who today told CNBC “you’ll be surprised at how risk averse we are” simply betting that due to his TBTF status, that he will be bailed out once the market finally does crash, dragging down over a trillion in deposits with it?

Or is that simply when the bank “bail in” regime will finally arrive in the US?

1 thought on “US Banks As Broken As Ever: JPM Excess Deposits Rise To New Record; Loans At Pre-Lehman Levels”