Following closely on the heels of Barclays significant downgrade, JPMorgan has cut its forecast for second-quarter GDP by 50% to a mere 1% growth (from their previous 2% expectation). Citing downside surprises to inventories, they note that “Fed officials won’t be thrilled about easing back on stimulus in September in the face of back-to-back one-handles on GDP growth.” Have no fear tyhough, as the rest of the year prmises to hockey-stick right back up to 2.5% (and 2.7% in 2014).

We are revising down our estimate for Q2 real annualized GDP growth from 2.0% to 1.0%, and revising up our projection for Q3 growth from 2.0% to 2.5%. We came into this week tracking a little light on our second quarter estimate, and the large downside surprise to May wholesale inventories moved that estimate much lower. Inventory accumulation was running light in Q1, and we had expected a significant contribution to Q2 growth from a rebuilding of stockpiles.

In the event, it now looks like inventories will be neutral for Q2 growth. Less stockbuilding in Q2 should imply a greater need to increase production in Q3, and our upward revision to current quarter growth is entirely due to a revised estimate of the inventory contribution; our estimate for Q3 domestic final sales is unrevised at 2.3%.  This revision mostly reflects a temporal reallocation of growth, though on net our 2013 Q4/Q4 forecast has been nudged lower from 2.1% to 1.9%.

If our revised estimate is right, Fed officials won’t be thrilled about easing back on stimulus in September in the face of back-to-back one-handles on GDP growth. Even so, we believe the FOMC remains more focused on the labor market, which has been performing well in spite of weak GDP, and will move ahead this fall with a scaling back of asset purchases. 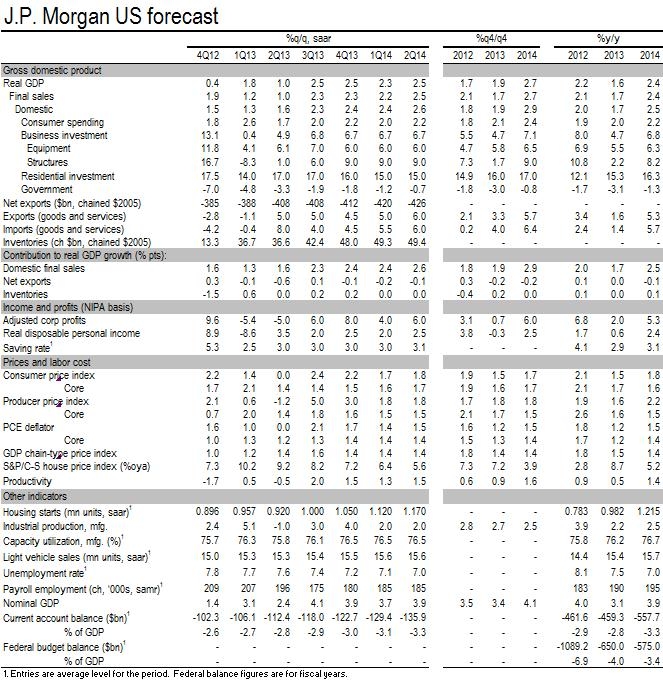