– The Chinese To Buy America’s Pork: Shuanghui Group Agreed To Acquire Smithfield Foods For About $4.7 BILLION 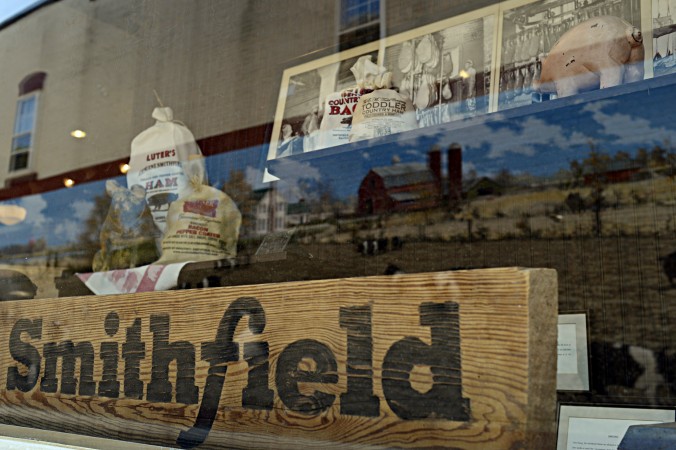 In this May 29, 2013 file photo, hams and other memorabilia is displayed at a restaurant in Smithfield, Va. Chinese company Shanghui has offered $7.1 billion to take over pork producer Smithfield in the largest sino-american transaction.Bit by bit, the Chinese are buying up strategic Chinese assets, something U.S. citizens are concerned about. (AP Photo/The Virginian-Pilot, Amanda Lucier)

In a free market system, investing in foreign companies is nothing out of the ordinary. Germany operates several plants and owns several companies in the United States for example and nobody ever complained about it. When it comes to totalitarian regimes like China, however, things are different.

More than one-third of the American public has signaled great concern about Chinese firms investing in American companies, according to a Hill+Knowlton Strategies survey.

Still, the U.S. government’s Committee on Foreign Investment in the United States (CFIUS) is holding top-secret meetings concerning the purchase of Smithfield Foods by the Chinese firm Shuanghui International Holdings Ltd. The Chinese company needs CFIUS approval to buy out Smithfield in the biggest Sino-U.S. deal ever.

But who exactly owns Shuanghui and what influence could the Communist regime exert?

Ownership of Shuanghui is difficult to ascertain given that the financial statements are not readily available on the Internet, but a Wall Street Journal June 3 article states that the company, originally a Chinese state owned firm, is 4.2 percent owned by New Horizon Capital, co-founded by the son of the former Premier Wen Jiabao.

“It is important to keep in mind that there is often not much of a difference between “the Chinese government” and “Chinese corporations,” states a June 6 article on the Economic Collapse website.

Americans need to understand that even if the Chinese state does not have a controlling interest in a company, the respective firm will not go against the will of the Chinese.

According to Zacks Investment Research’s May 30 analysis, Smithfield Foods will operate as a wholly owned subsidiary of Shuanghui, continue to be based in Virginia, and none of the executives, management, or employees will lose their jobs.