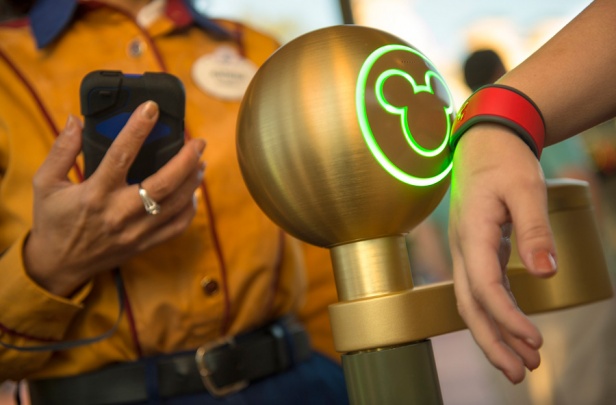 Disney’s MagicBand can be used to “tag” into rides, hotel rooms and pay in stores (Credit: Disney)

Disney just announced an electronic wristband for visitors to its theme parks that neatly illustrates why companies like Google and cellphone networks are pushing the idea of using contactless technology in phones for payments, tickets, boarding passes and more. The short answer? They want data.Disney’s MagicBand, an ID tag that uses Bluetooth and contactless NFC technology, is being introduced at Walt Disney World in Florida. It replaces a person’s ticket and can be used to tag into rides and other attractions at the park. It can also be used to open a guest’s hotel door, and to pay in stores at the resort. In the future, the Bluetooth link will make it possible for you to wander up to an attraction or Disney character and be greeted using your first name.

To sum up, a person opting to use a MagicBand could find their stay much more convenient, and perhaps even leave their wallet back at their hotel. It’s a very similar pitch to that made by companies including Google, and the consortium of major cellphone networks, Isis, for contactless “wallets” based on near field communication chips (NFC) built into phones.

However, Disney’s MagicBand program has significant benefits to the company, too. The MagicBand collects valuable data each time it is tagged or used to buy something, providing a new perspective on what Disney’s customers are doing at the resort. It becomes possible to do things like look for relationships between the attractions and rides a person visits, or the characters they meet, and what they spend money on in the gift shop. Disney could look for signs of the social dynamics of groups of people that arrive at the park together.

Disney has plans to install devices that use Bluetooth to log any MagicBand that passes by, said Thomas Staggs, chairman of Walt Disney Theme Parks and Resorts, Wednesday. People will be able to opt out of that part of the data collection he said, but whether data logged when a person actively tags a band would be treated in the same way wasn’t mentioned.

Using a contactless wallet app on your phone could provide similar data harvesting opportunities. A person using one might get to leave their wallet at home, and could pay for stuff or provide tickets and boarding passes with a tap of their phone. The provider of the wallet app would get a detailed feed on where its users went, what they were doing and what they spent money on.

Some people will be wary of such data collection, many more probably won’t care. Putting that issue aside, though, Disney’s MagicBand sounds like it is genuinely useful and thanks to the company’s ability to ensure everything inside its resorts works with the technology, could make your stay at Disney’s resort go more smoothly. The stuttering progress of NFC wallets and the like outside the magic kingdom – despite the hype (see “Google Wallet, Who’ll Buy In?”) – is to a large degree because the real world is a much messier place. Neither Google nor the cellphone carriers or other companies pushing their own MagicBand-style wallets can yet offer something that works in every store, with every bank and in every place. For now, the benefits of contactless wallets are much clearer to the providers of them than to consumers.