Take a good look at the chart of the Nikkei below: 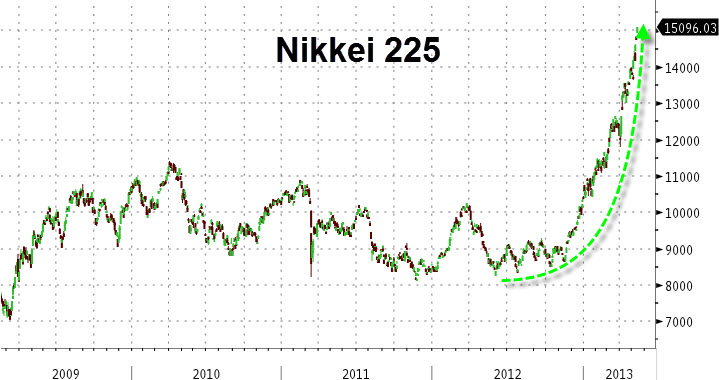 Supposedly this is the same chart that the new BOJ head, Haruhiko Kuroda, was looking at when he was responding to Japanese lawmakers during a session of the upper-house budget committee, where he flatly rejected an opposition-party member’s argument that the recent rapid rise in the Tokyo stock market is out of line with Japan’s real economy. “At this moment I do not think they are in a bubble,” Kuroda said. And everyone believes him, just Because central bankers are so good at objectively observing how contained subrpime is big the asset bubbles their ruinous policies create.

Incidentally, all this happens as the Nikkei225 closed at 15096, and is up 45% in 2013 alone! It will easily surpass the Dow Jones Industrial Average in absolute terms once tonight’s trading session begins, considering the ongoing pounding the Yen is sustaining in today’s session.

Mr. Kuroda also countered the view that higher import prices as the result of a weaker yen could throw Japan’s economy into growth-harming “cost-push” inflation—inflation driving by rising costs, in contrast to “demand-pull” inflation.

He’s right, but only if one ignores the recent price hikes in food, luxury goods, energy costs, electronic equipment and all that “other stuff” profiled here previously. Then again, ignoring “other stuff” is something Japan is very good at: especially when it is measured in sieverts, roentgens and curies.

Finally, the following confirms that the BOJ will not stop its concerted effort to eradicate the Japanese middle class in order for Goldman’s partners to get record bonuses in 2013:

Mr. Kuroda’s latest remarks add to signs that the BOJ sees nothing in recent market developments to make it want to slow its monetary loosening, which aims to eradicate deflation—indeed, produce a 2% inflation rate—within two years by doubling the amount of money in Japan’s financial system. Lawmakers Wednesday didn’t ask Mr. Kuroda about climbing yields on Japan’s government debt, but he told a news conference over the weekend that he expects no jumps in yield for the time being

See? No need to panic. Kuroda said so.