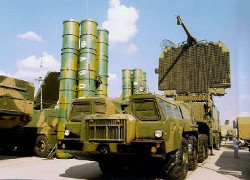 Israel has warned the U.S. that a Russian deal is imminent to sell advanced ground-to-air missile systems to Syria, weapons that would significantly boost the regime’s ability to stave off intervention in its civil war.

Naturally, there were no official statements on the matter, meaning interpretation of events is up to “objective”,  “unconflicted” media spin, the same way the US government is convinced it was the Assad regime using chemical weapons despite the UN’s report claiming just the opposite.

U.S. officials said on Wednesday that they are analyzing the information Israel provided, but wouldn’t comment on whether they believed the sale of S-300 missile batteries was near.

Russian officials didn’t immediately return requests to comment. The Russian Embassy in Washington has said its policy is not to comment on arms sales or transfers between Russia and other countries.

The government of President Bashar al-Assad has been seeking to purchase S-300 missile batteries—which can intercept both manned aircraft and guided missiles—from Moscow going back to the George W. Bush administration, U.S. officials said. Western nations have lobbied President Vladimir Putin’s government not to go ahead with the sale. If Syria were to acquire and deploy the systems, it would make any international intervention in Syria far more complicated, according to U.S. and Middle East-based officials.

According to the information the Israelis provided in recent days, Syria has been making payments on a 2010 agreement with Moscow to buy four batteries for $900 million. They cite financial transactions from the Syrian government, including one made this year through Russia’s foreign-development bank, known as the VEB.

Since Russia has a naval base in Syria, it probaly should not come as a huge surprise that Putin is on friendly terms with the current regime. After all it is not just Israel and the US that have strategic visions regarding a country that many see as the gateway to the Israel-Iran conflict.

In 2009, the Russians started upgrading Syria’s outdated analog SA-3 surface-to-air missile systems, turning them into the SA-26 Pechora-2M system, which is mobile and digital, equipped with missiles with an operational range of 17 miles, according to the assessment.

The U.S. is particularly worried about another modernized system Moscow provides—the SA-5. With an operational range of 175 miles, SA-5 missiles could take out U.S. planes flying from Cyprus, a key North Atlantic Treaty Organization base that was used during Libya operations and would likely be vital in any Syrian operation.

US planes flying out of Cyprus carrying Cypriot gold perhaps?

As for the whole farce surrounding Syria, ok, ok – we get it. By now even the cheap seat have grasped that Israel wants to not only start a war with Syria, but to preferably have the US fight it, but not before alienating public opinion against Russia and soon China.

1 thought on “Israel Informs U.S. That Russia Plans To Sell Weapons To Syria”