Following the dramatic change in rhetoric from Washington over the past 24 hours regarding Syrian “Weapons of Chemical Destruction“, the phrases “Middle East” and “geopolitical risk” are suddenly back in the same sentence on the lips of those sitting around trading desks, leading to a powerful jump in the oil complex where Brent is having its best day in four months, and WTI in give.

Yet the feasibility of an armed conflict with Syria, which Russia has made very clear in the past is a strategic ally in the region aside, is the probability of an incursion truly imminent? For that we go to Stratfor’s latest weekly update of US naval assets, which shows that if indeed Obama is planning to do a flyover showing off his Nobel Peace prize above Damascus, there will be a waiting time of at least several weeks as there is nothing in the immediate Syrian offshore vicinity to provide the necessary naval support.

It appears that the 5th Fleet only has CVN-69 Eisenhower in the vicinity of Bahrain, as well as one big deck amphibious ship, the Kearsarge keeping an eye on the Straits of Hormuz. Assuming both ships are tasked to supervise any missions involving Syria that would leave Iran and the Straits of Hormuz unguarded, which is why we doubt this would happen. In fact, it is more likely that CVN 75 and 77, which are currently under way in the Atlantic, will be redirected to the east Mediterranean to provide the necessary air cover should operation “Liberating the Syrian Al-Qaeda funded Rebellion” be a go.

Perhaps as interesting is the positioning of LHA 5 and LHD 6 in the East China Sea, just off the China/Japan disputed island chain, where things are just as sensitive as they are in the middle east and where neither side is willing to back down. 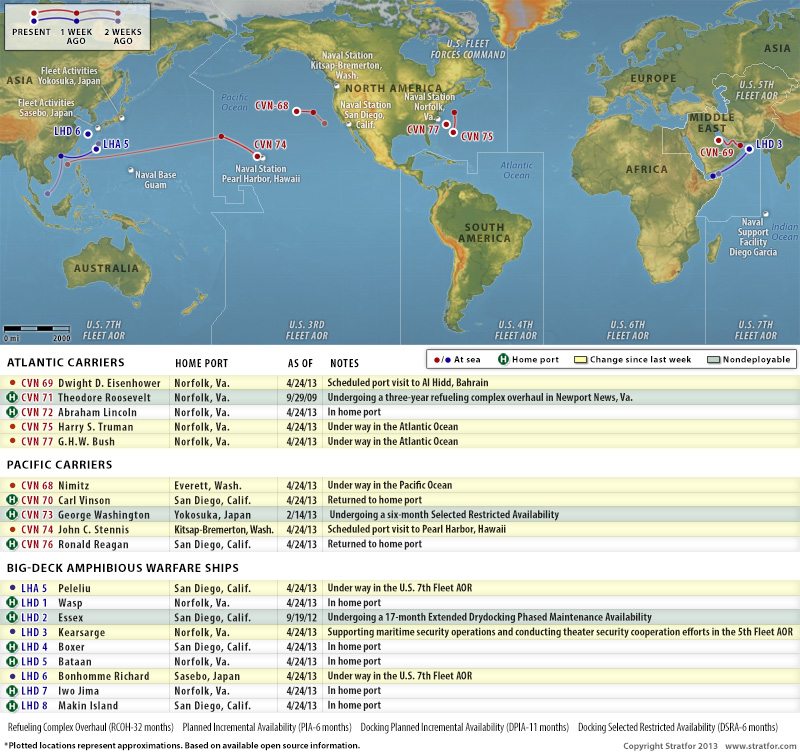