A tower of 20,000 pages of Obamacare regulations, wrapped in a neat red ribbon and first unveiled publicly by Senate minority leader Mitch McConnell at last weekend’s Conservative Political Action Conference, made its way to the Senate floor today as the upper chamber debated the continuing resolution to fund the government. It took several GOP aides to haul the paper tower through the Capitol to make its appearance; the National Journal’s Shane Goldmacher captured the scene: 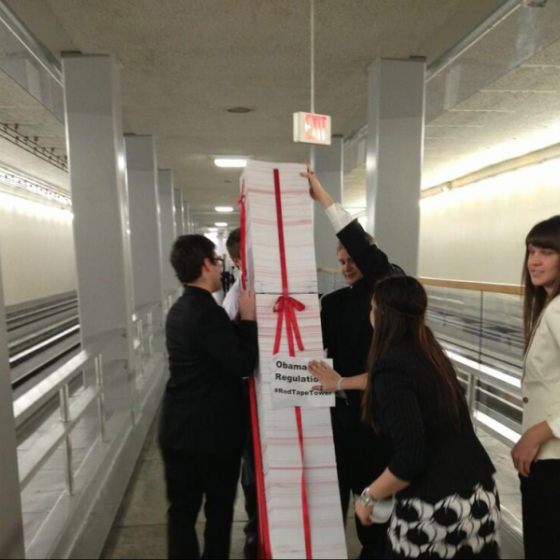 With the hashtag #redtapetower trending on Twitter, McConnell stood next to the regulations as he called for repealing Obamacare. At CPAC, where staff members set up the tower on stage the night before McConnell’s address, he called for dismantling the program “root and branch” and vowed to fight the legislation and “every other assault on liberty the Left throws at us.”

The “red-tape tower” has been making its way around Washington, D.C. At a press conference earlier today, GOP senator Mike Johanns, flanked by senator Orrin Hatch, stood next to it as he called for the repeal of the regulations. The tower reportedly stands a whopping 7 feet, 3 inches high. 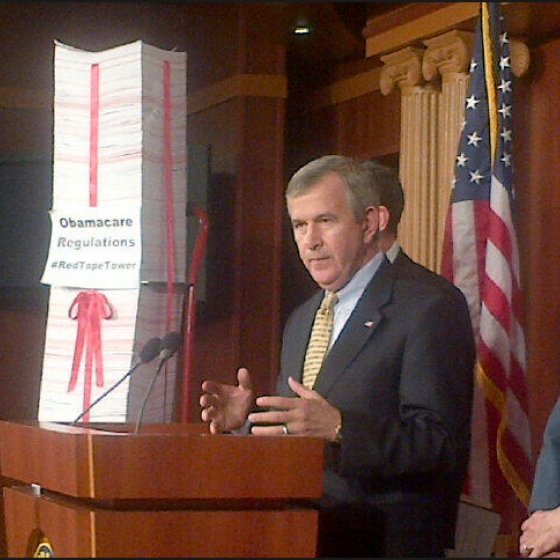 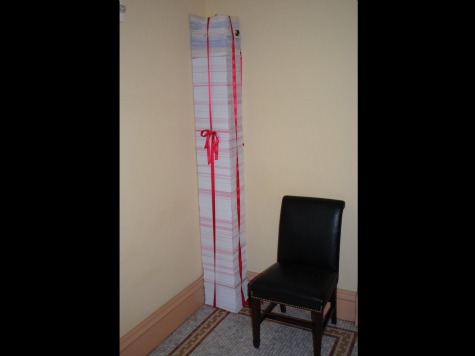 Senate Republican minority leader Mitch McConnell sent out a shocking photo showing what it looks like if you stack every page of Obamacare regulations one on top of the other. The stack reaches to more than seven feet in height and is so big it might take a 3-D printer to print it all.

“This is over 20,000 pages and measures 7′ 2.5″,” McConnell said of the amazing photo. “These are all the Obamacare regulations published in the Federal Register up through last week. Then last Friday they added another 828 pages.”

These additions seemingly come on a monthly basis as Congress finally starts finding out, as Rep. Pelosi said, “what’s in the bill” and more rules are added, clarified, and altered.

Obamacare isn’t just a harmless stack of paper though, McConnell says. Hidden in those thousands of pages is a myriad of job-killing rules that have already had real-world consequences.

The warnings started as soon as Obamacare was born. Douglas Elmendorf, Director of the Congressional Budget Office, said in February of 2011 that Obamacare could cost 800,000 jobs. Recently, the Federal Reserve has stated that Obamacare is the reason for thousands of “planned layoffs.”

On March 6, The Hill reported, “The Federal Reserve on Wednesday released an edition of its so-called ‘beige book,’ that said the 2010 healthcare law is being cited as a reason for layoffs and a slowdown in hiring.”

That same day, The Hill also said, “Higher healthcare costs were also reported in the districts of Chicago, and the Kansas City district reported ‘changes in health care policy and fiscal uncertainty as reasons for delayed hiring.'”

In its own report, the Federal Reserve Board of Governors noted:

Sadly, one restauranteur in Virginia has reported that he may lose his entire chain of Dunkin’ Donuts because of Obamacare’s onerous requirements.