As far as Asians are concerned, the Fukushima nuclear accident seems to have encouraged them to embark on new nuclear projects.

They probably look at Japan, and say, “Well their government has said all along there is no bad effect from triple meltdowns and melt-throughs, and people don’t seem to care anyway, so what’s there to lose? Not much.”

Japan (and probably South Korea and Russia, too) would be very willing to foot the bills anyway via the loans at preferential rates and give away other goodies (some may call “bribes”) to the government officials.

Japan is downwind, but that’s not even a slight concern to the nuclear makers and the Japanese government, particularly the one under the prime minister who has already started going to bathrooms too frequently during the Diet sessions. (PM Abe suffers from ulcerative colitis.) 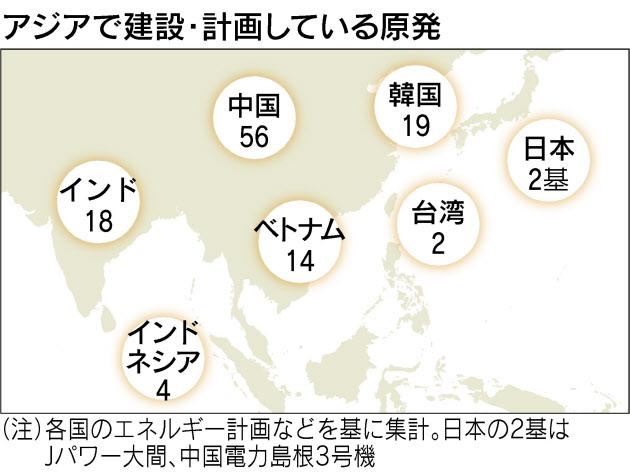 Nikkei says it means more opportunities for the Japanese nuclear manufacturers, but the competition will be intense among Japan, South Korea, and Russia. Nikkei’s estimate is the 50 trillion yen (US$535 billion) market in Asia alone, at 500 billion yen per reactor.