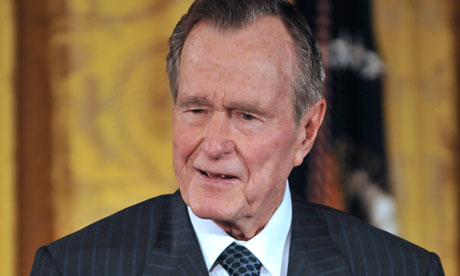 George HW Bush: the emails were said to contain details of the state of the ex-president’s health and his family’s phone numbers. Photograph: Getty Images

An investigation has been launched into how a hacker managed to access the email accounts of the former US president George HW Bush and members of his family.

A number of Bush family photographs and personal emails were posted online by the hacker, who goes by the name of Guccifer.

According to the Smoking Gun website, the emails – which were sent between 2009 and 2012 – contain details about the state of the former president’s health as well as the home addresses, mobile phone numbers and email addresses of dozens of members of the Bush family.

It also reports that Guccifer claims to have hacked “hundreds of accounts” and is well aware “the Feds” are investigating him.

A spokesman for Bush, who is 88, told the Houston Chronicle an investigation was under way, but declined to comment further. “We do not comment on matters under criminal investigation,” said Jim McGrath.

Five years ago, the FBI was called in after an email account belonging to former US vice-presidential candidate Sarah Palin was hacked and its contents posted on the internet.

Photographs and screenshots taken from the Yahoo-hosted account were published online in September 2008 after being sent to the whistleblowing website Wikileaks.

The images showed a chain of messages between Palin – then governor of Alaska – and her state government aides, as well as a draft letter to Arnold Schwarzenegger, who was governor of California at the time.

Although some of the emails – from the address gov.palin@yahoo.com – appeared to be private, Wikileaks defended its decision by saying that Palin should not have been using a private account to send official emails.