Connecticut State’s Attorney Stephen Sedensky has argued that unsealing warrants in the Sandy Hook case might “seriously jeopardize” the investigation by disclosing information known only to other “potential suspects.”

Sedensky said that unsealing the warrants would also:

The statement by the CT prosecutor’s office is the first indication from state authorities that Adam Lanza may have not acted alone.

The statement was made in support of a motion to continue the seal on the results of five search warrants for 90 more days.

The male subject identified as the shooter at Sandy Hook Elementary School has been identified as ADAM LANZA DOB: 04/22/92; he resided at 36 Yogananda Street.

His cause of death was gunshot wound and his death is ruled a suicide. However, neither Vance nor the CT Attorney General’s office have ever ruled out the possible presence of other suspects.

The New Haven Register reports Vance as having said: “Whenever you conduct an investigation you don’t speculate as to where it’s going to take you, as I said, we’re going to look at every single thing, every piece of material and we’ll take it from there.”

The CT State Attorney General’s Office is handling the investigation of the mass shooting, in which 20 children and 8 adults died last December 14th.

The motion to extend the seal on the records for 90 days was granted by Superior Court Judge John Blawie, who wrote in his decision that:

“The court finds that due to the nature and circumstances of this case and the ongoing investigation, the state’s interest in continuing nondisclosure substantially outweighs any right to public disclosure at this time,”

The warrants were for searches, on different dates, of the Lanza home, and of Adam Lanza’s mother’s two cars.

One of the cars, a 2010 black Honda Civic, was the vehicle which Lanza allegedly drove to the crime scene. The other, a 2009 silver BMW, was parked in the garage attached to the Lanza home.

Lt. Vance did say in a press conference on December 15, 2012, somewhat apologetically for not being able to answer all of the reporters’ questions, that there were “some cards that we’re holding close to our vest.”

State’s Attorney Sedensky wrote in the motion that:

“No arrests have been made and none are currently anticipated, but have not been ruled out.”

An image of the key passages in the court motion is below.

The entire document has been uploaded at Scribd by the New Haven Register, the venerable New England newspaper associated with the home of Yale University. 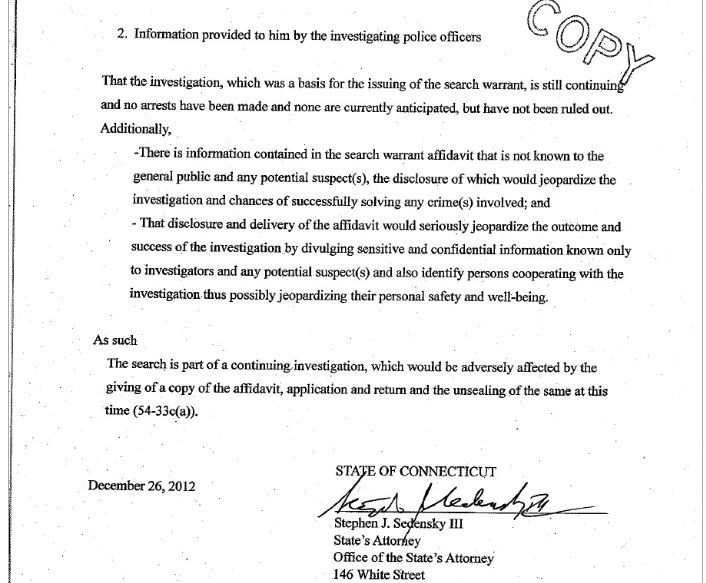