One half of the reason why the “market” has finally been reacquainted with gravity is its realization that the previously reported Spanish kickback scandal, which incidentally has been known for over two weeks to most if not the algos that push stocks higher, is refusing to go away. As El Pais summarized below, the graft revealed in this ongoing political fiasco threatens to take down everyone in the Spanish ruling PP, from PM Rajoy, who received more than €300,000 over the years, and on to the lowest rungs of political corruption. 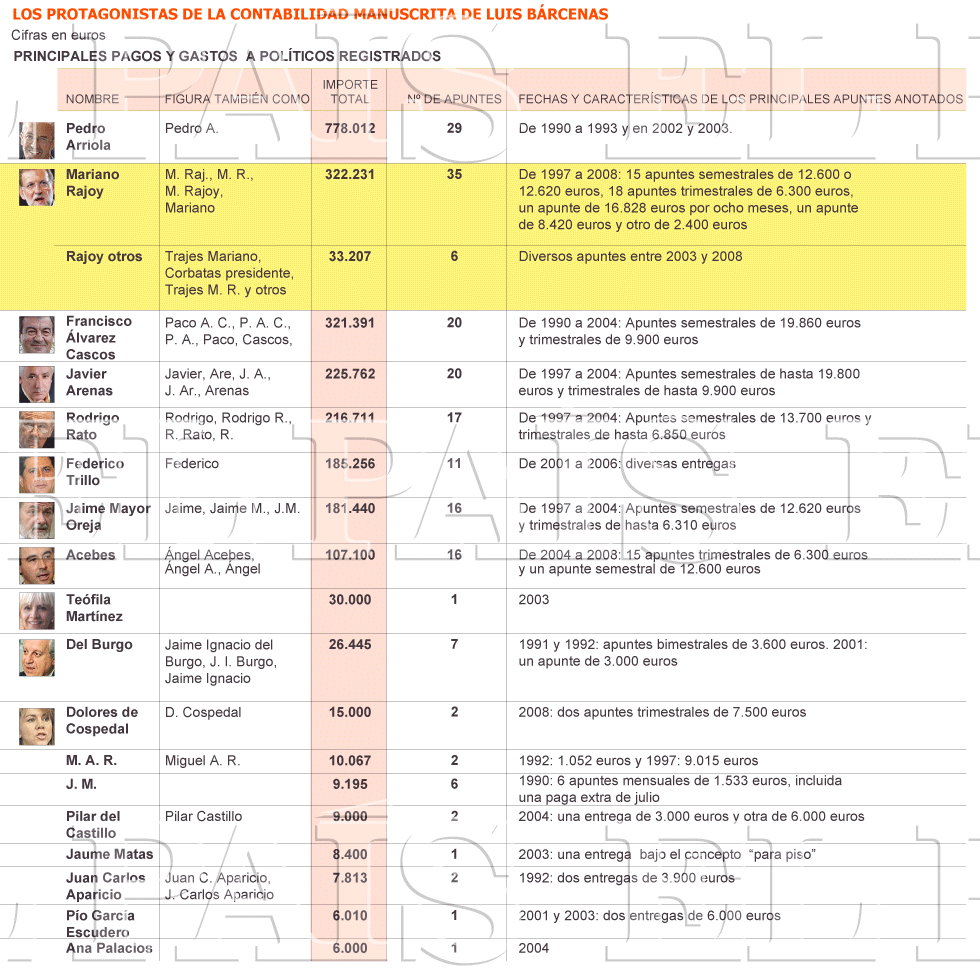 The other half of the reason for today’s Italian stock market collapse is the well-known to our readers scandal involving Italian bank Monte Paschi, which also refuses to go away due to its massive political implications three weeks ahead of the Italian elections. Yet the reason why little if anything has been mentioned about what may soon be a nationalization of the third largest (and just as insolvent) Italian bank in the mainstream US press is the resulting humiliation for the current ECB head, ex-Goldmanite Mario Draghi, who has been aggressively pushing to become a bank supervisor of all European banks as ECB head, yet with every day new revelations emerge about how epically he failed to supervise a major Italian bank right under his nose as head of the Bank of Italy.

The latest in this developing scandal which not even the market can ignore any more comes once more from the Bank of Italy, which has once more changed its story. Recall that as recently as January 23 Mario Monti vowed in Davos that “nobody knew nuthin”:

This was a sentiment that was vouched by the Bank of Italy itself, which pled complete ignorance and accused then-BMPS management of everything.

Turns out Monti and the Bank of Italy both lied.

And now that it has to change its story once more, it is instead blaming the fact that it had no authority to act over what has emerged its own inspectors discovered were derivative irregularities as early as mid-2010. As Reuters summarizes, what we first said two weeks ago: “The roots of the corruption and derivatives scandal at Monte dei Paschi all stem back to when Draghi, now president of the European Central Bank, was chief of Italy’s central bank from 2006 to 2011.”

So now that the Bank of Italy can no longer plead ignorance, what is the defense? Why inability to actually do anything.

The Bank of Italy (BoI) says it did everything in its powers to oversee Monte Paschi, including forcing it to raise new capital and applying behind the scenes pressure to force out its executives, who left last year.

Last month, the BoI approved 3.9 billion euros ($5.3 billion) of state loans needed by the ailing Siena bank to shore up its capital.

But the BoI, under Draghi’s leadership, is under fire for not acting faster to sanction those managers and make its doubts public even though its inspectors had spotted the derivatives contracts at the center of the scandal back in mid-2010.

However, the senior BoI source stressed that the decision on launching a sanctions procedure, involving publicly blaming and fining bank officials, does not depend on the BoI governor and its five member executive board, but on the bank’s inspectors and then a series of lower committees.

“The inspectors are the only people responsible for initiating a sanctions procedure so if they don’t find anything in the course of their inspection then it’s not possible for the top management to start the process,” said the source, who asked not to be named.

“We instruct the staff to be absolutely free from any influence from us, to present exactly the case, so if a sanction is decided then they present a proposal to the board and the board decides on the actual implementation of the sanctions.”

In the summer of 2010 BoI inspectors uncovered two opaque derivatives contracts that could cost Monte Paschi 720 million euros and are now at the center of fraud investigations, yet did not propose that sanctions be launched.

That decision “had nothing to do with the board,” the official said, though he added that Draghi was shown the inspectors report.

He declined to say whether he thought it was a good decision not to propose sanctions at that time.

Why was the BoI caught lying? Same as every other time: a media leak.

That 2010 inspectors’ report was leaked to the press and sparked much of the current criticism of the BoI because the sharp criticisms of Monte Paschi’s accounts and operations made by the inspectors were not followed by pressing action.

The BoI did not summon Monte Paschi’s executives, now under criminal investigation, until November 2011, after Draghi had left to head the ECB. It did not launch a sanctions procedure – which is still not completed – until the following year, after the officials had left the bank.

And the piece de resistance:

“We may perhaps appear to be slow, but I think we are deliberate,” the official said. He also stressed that although Monte Paschi failed to comply with the BoI’s requests, the wrongdoing was already done at the time of the 2010 inspection. “What took place afterwards was to try to disguise the losses but it wasn’t a recurrent or growing pattern of misbehaving,” he said.

Deliberate indeed: very deliberate in covering up fraud, and pretending the situation is fixed when in reality anyone with half a brain now realizes that despite the endless pumping of liquidity by the same ECB that Mario Draghi is now in charge of, things on Italian bank balance sheets are uglier than ever, and just getting worse by the day.

This comes from the people who continue lying every single day, telling any idiot who still believes them that “Europe is fixed.”

And the worst is that nobody knows just which other Italian (at first, at least) will blow up next, certainly not Italian shareholders which just dumped local stocks with a vigor not seen since the July near-bankruptcy of Spain, resulting in the Italian stock market plunging 4% or the most in six months.

More on this scandal here, here and here.