In what was the first clear instance of aggression by Israel toward Syria, overnight Israeli jets conducted a bombing run over a military site in Syria, targeting what according to Israel was a military convoy heading to Lebanon. As Al Arabiya reports: “Israeli jets bombed a convoy on Syria’s border with Lebanon on Wednesday, sources told Reuters, apparently targeting weapons destined for Hezbollah in what some called a warning to Damascus not to arm Israel’s Lebanese enemy. “The target was a truck loaded with weapons, heading from Syria to Lebanon,” said one Western diplomat, adding that the consignment may well have included anti-aircraft missiles. The overnight attack, which several sources placed on the Syrian side of the border, followed warnings from Israel that it was ready to act to prevent the revolt against President Bashar al-Assad leading to Syria’s chemical weapons and modern rockets reaching either his Hezbollah allies or his Islamist enemies.” 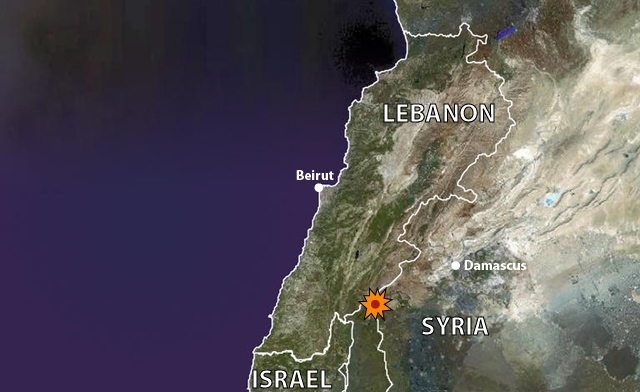 More on the target and location of the attack:

A source among the Syrian rebels said an air strike around dawn (0430 GMT) blasted a convoy on a mountain track about 5 kilometres (3 miles) south of where the main Damascus-Beirut highway crosses the border. Its load probably included high-tech anti-aircraft and anti-tank missiles, but not chemical weapons.

“It attacked trucks carrying sophisticated weapons from the regime to Hezbollah,” the source said, adding that it took place inside Syria, though the border is poorly defined in the area.

A regional security source said the target was weaponry given by Assad’s military to fellow Iranian ally Hezbollah:

“This episode boils down to a warning by Israel to Syria and Hezbollah not to engage in the transfer of sensitive weapons,” the source said. “Assad knows his survival depends on his military capabilities and he would not want those capabilities neutralised by Israel – so the message is this kind of transfer is simply not worth it, neither for him nor Hezbollah.”

With official secrecy shrouding the event, few details were corroborated by multiple sources. All those with knowledge of the event – from several countries – spoke anonymously.

There was no comment from the Israeli or Syrian governments nor Hezbollah. Israel’s ally the United States declined all comment. A Lebanese security source said its territory was not hit, though the army reported a heavy presence of Israeli jets through the night after days of unusually frequent incursions.

Iran has previously warned that any attack on Syria is the same as an attack on Iran. For now, however, Iran has not issued a statement:

There was no immediate comment on the incident from Tehran, which Israel views as its principal enemy and with which it is engaged in a bitter confrontation over Iran’s nuclear programme.

Perhaps what is more interesting is how Russia and/or China which have made clear that Syria is a strategic geopolitical center for bnoth in the past will react, if at all.

Keep an eye on Brent as the middle east may be finally coming out of hibernation.