Obama is, of course, (NOT) different: 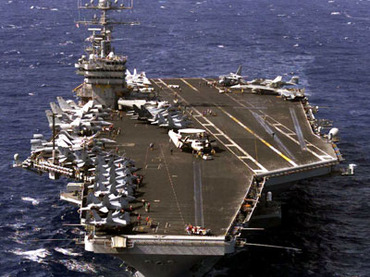 The 8 day mini war between Israel and Gaza has come and gone and any attempts at provoking a wider regional conflict, one involving Iran (if indeed this was the intention), have failed. Which means the fallback plan – Syria – is back in play. And sure enough, as both the most recent naval map update, which shows a US aircraft carrier and a big deck amphibious warfare ship, both of which house thousands of troops and numerous offensive aircraft, and an RT news flash, indicating that thousands of troops have amassed near the Syrian shore confirm, the time for a US invasion may be near. The alibi? “Chemical weapons” of mass or non-mass destruction. In other words the Iraq playbook all over again.

The USS Eisenhower, an American aircraft carrier that holds eight fighter bomber squadrons and 8,000 men, arrived at the Syrian coast yesterday in the midst of a heavy storm, indicating US preparation for a potential ground intervention.

While the Obama administration has not announced any sort of American-led military intervention in the war-torn country, the US is now ready to launch such action “within days” if Syrian President Bashar al-Assad decides to use chemical weapons against the opposition, the Times reports.

Some have suggested that the Assad regime may use chemical weapons against the opposition fighters in the coming days or weeks.

“We have (US) special operations forces at the right posture, they don’t have to be sent,” an unnamed US official told The Australian, which suggested that US military troops are already near Syria and ready to intervene in the conflict, if necessary.

The alibi used by the “democratic” press to justify what may imminently be a land invasion? Chemical weapons:

The Syrian military is prepared to use chemical weapons against its own people and is awaiting final orders from President Bashar Assad, U.S. officials told NBC News on Wednesday.

The military has loaded the precursor chemicals for sarin, a deadly nerve gas, into aerial bombs that could be dropped onto the Syrian people from dozens of fighter-bombers, the officials said.

As recently as Tuesday, officials had said there was as yet no evidence that the process of mixing the “precursor” chemicals had begun. But Wednesday, they said their worst fears had been confirmed: The nerve agents were locked and loaded inside the bombs.

U.S. officials stressed that as of now, the sarin bombs hadn’t been loaded onto planes and that Assad hadn’t issued a final order to use them. But if he does, one of the officials said, “there’s little the outside world can do to stop it.”

Tangentially, remember when Iraq was supposed to have warehouses full of “WMDs”, which story ended up being a fabricated lie. But at least Turkey is ready: after all NATO has already handed over various Patriot missiles to prevent a Syrian retaliation against the ruling Assad regime.

And just to make sure the escalation is complete, the French are coming.

The mission would only involve a relatively small amount of special forces, and a number of NATO countries — including the UK and the US — would be involved. The mission would be modelled on the Western intervention in Libya, the magazine reports.

The action appears to be in response to fears that the regime is planning on using chemical weapons in the conflict. Earlier this week one US official told reporters that it was believed Bashar al-Assad’s forces had moved two key components of a deadly nerve gas in preparation for an attack (a later report refuted this, however).

Le Point says a large ground operation “is out of the question” and that a smaller action aimed largely at securing chemical weapon stockpiles.

So putting it all together, it appears that once again the imminent escalation play is one where an antagonized Syria is forced to strike back, an act which “hopefully” will get Iran involved in the fray, and from there it is smooth sailing for both Israel and the “democratic” forces of the world.

The only wild card: Russia and China, both of which have made it very clear they have quite strategic interests in the Syria region on numerous prior occasions.

Appendix A: full naval map, via Stratfor, where one can see not only aircraft carrier Eisenhower off the Syrian coast but LHD-7 Iwo Jima Big Deck Amphibious warfare ship alongside it: 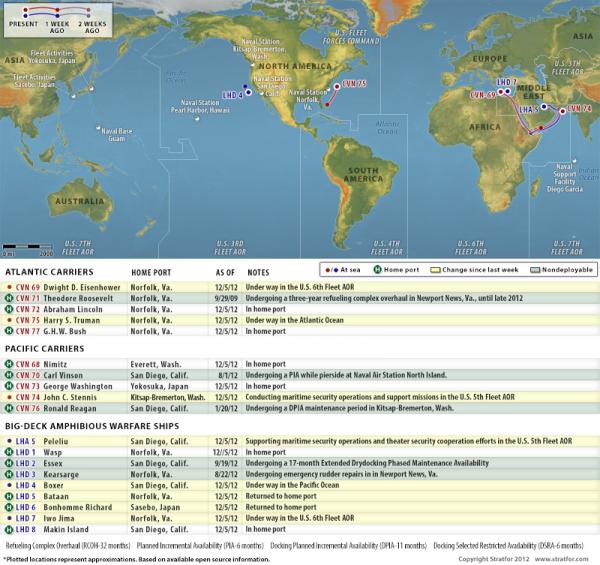