Rand Paul is just another TRAITOR. (Links are down below.) 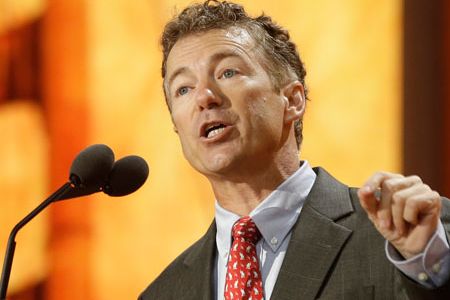 Rand Paul is not one of the big names, but Rand Paul has been rumored as a possible presidential contender in 2016, and today he confirmed that is indeed a possibility. “I want to be part of the national debate,” he told ABC News. “I’m not going to deny that I’m interested.” Paul also discussed taxes – he’ll never vote to raise them – and his dad’s legacy. “He’s grown the party in a tremendous way,” Rand said, crediting Ron with bringing in more young people, independents, libertarians, and constitutionalists. “There’s a sea change on the Republican side, and I think my father’s responsible for some of that.” newser.com

The comment comes on the heels of a round of post-election press in which Paul appeared eager to encourage the GOP to broaden its issues and exhibit some flexibility on a number of policies that he believes have hurt the party’s support. huffingtonpost.com

In an interview with Politico, Paul staked out more liberal positions on immigration reform, marijuana laws and trimming of the defense budget. thepresidency.us

While Paul’s blend of ideas may be interesting to some, it doesn’t yet appear to be making waves as a viable option among Washington insiders. According to the latest National Journal Political Insiders, Paul gets zero support from either Democrats or Republicans. Former Florida Gov. Jeb Bush, New Jersey Gov. Chris Christie and Sen. Marco Rubio (R-Fla.) were the overwhelming favorites in that survey. thepresidency.us

Paul’s father, U.S. Rep. Ron Paul (R-Texas), ignited a libertarian base in the Republican primaries during the 2008 and 2012 election cycles, but the elder Paul decided against running for his seat in Congress this year. politico.com