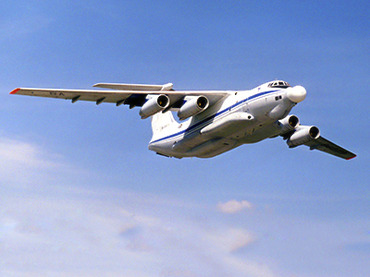 Aviation lab A-60 (Image from http://nhungdoicanh.blogspot.ru)

Russia’s high-energy airborne laser system project is back in the frame. Unlike the similar, now-closed US airborne counter-ballistic laser project, the Russian laser station will be assigned for space counter warfare if a space arms race starts.

­“The project’s primary objective, according to the data presented earlier, is making inoperable adversary space vehicles’ sensors and optical electronic systems by directed laser beam impulse, which is the first stage of the project. The second stage is, in case the laser gains sufficient power of the beam, the system will be able to engage ballistic targets – which is a remote prospect,” director of the Center for Analysis of World Arms Trade Igor Korotchenko informed RT.

According to Korotchenko, scientific research, engineering and technical testing of the ambitious project are entrusted to Russia’s leading air and space defense corporation Almaz-Antey and Beriev aviation scientific-technical group.

Since the time of the Soviet Union, Russia has substantial potential to create combat laser systems, airborne in particular, he says.

The initial program started back in 1970s. The first A-60 test-bed aircraft (modified Ilyushin-76 airlifter) took into the air in 1981 and two years later it was laser-equipped and performing experiments. Another test-bed aircraft joined the program in 1991.

To this day only the latter flying laboratory remains, but the actual work on the airborne combat laser system did not stop over the last two decades, despite the disastrous situation with financing of the military-industrial complex after the fall of the USSR. The last four years witnessed special attention to the program.

Over the years the A-60 program developed into an operable 1LK222 laser system. During state tests in 2009, the system was tested on the optical systems of a satellite on 1,500km-high orbit. After that information about the project went into shadows.

“The project never stopped,” Korotchenko, told RT. “It’s just the announcement in the media has been made only now.”

The new system has reportedly been named Sokol-Eshelon (Falcon-Echelon). Scientists say the laser is practically ready, so the A-60 aircraft that spent two years on the airfield with most equipment dismantled will be back in the skies next year.

The A-60 test-bed aircraft is going to be fully modernized and refurbished, including installation of a new, more powerful laser station, by late 2013, reports Izvestia daily newspaper.

Russia’s Defense Ministry commented to RT it has “definitely” put the airborne laser project on its wish-list and will be closely following the development of the project.

“Surely we’re not going to follow the space arms race, but we will have a counterbalance tool to even chances in case of a potential military conflict to ensure security of the Russian Federation,” he outlined.

It appears Russian scientists have overcome the problems that put an end to the American airborne combat laser program that was developed jointly by Boeing, Northrop Grumman and Lockheed Martin/Boeing for 16 years. The modified Boeing 747-400F, equipped with a laser station, reportedly successfully intercepted two ballistic missiles during tests in 2010.

All the following attempts proved to be unsuccessful and, after the final flight on February 14, 2012, the laser Boeing with dismantled equipment was sent to the famous Boneyard, the US Aerospace Maintenance and Regeneration Group aircraft and missile storage.

“Technological potential inherited from the Soviet Union and preserved in Russia gives grounds for successful realization of the project,” Korotchenko shared.

The developers of the new laser station say they are still unsure what platform will be used for the system in the future: the recently introduced airlifter Ilyushin-476, or a perspective strategic bomber.

“Laser combat systems have bright perspective in Russia for use in both troops and the Air Force,” Korotchenko concluded.

It must be noted that the Soviet Union used to have a considerable number of combat laser programs, among them space-based high-energy laser battle station Skif-DM (a part of the Buran shuttle and Energy booster rocket program), the A-60 laser aircraft, sea-based combat laser for future advanced battleships, tested on Dikson laboratory ship in the Black Sea and even a laser tank Szhatie (Compression), developed to working machine capable of knocking out enemy’s optical systems on the battlefield.

Reportedly, A-60 platform was once testing the future megawatt-class laser for space battle station Skif-DM.

Two decades after the fall of the USSR, according to available open-source data, only the laser test-bed aircraft A-60 project is alive and kicking.