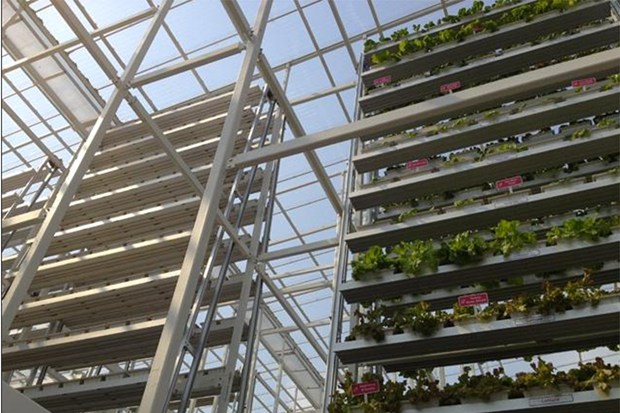 The first commercial-scale vertical farm has opened in the tiny, densely-populated city of Singapore, with the aim of decreasing dependence on food imports

Singapore, which lies at the end of the Malay Peninsula, is just 710 square kilometres, almost all of which is city. That leaves little space to grow vegetables. As a result, the city currently only produces seven percent of its vegetables locally, forcing it to buy from other countries.

The vertical farm, which has been developed by Sky Green Farms, consists of 120 aluminium towers, each extending up to 9 metres in height. It can produce 500kg of three kinds of vegetables per day, all of which are sold in the local FairPrice Finest supermarkets. However, they do cost a little more than imported vegetables.

That hasn’t stopped them becoming enormously popular with local consumers, and they’re frequently out of stock. As a result, the company is looking for investors to allow it to more than double its number of towers, producing two tonnes of vegetables per day. As supply ramps up, economies of scale should also be able to cut the price.

“We are always looking at ways to increase our sources of food supply and if we can produce some in Singapore, then that can go some way to meet local demand,” Lee Yi Shyan, Senior Minister of State for National Development and Trade and Industry, told Channel News Asia.