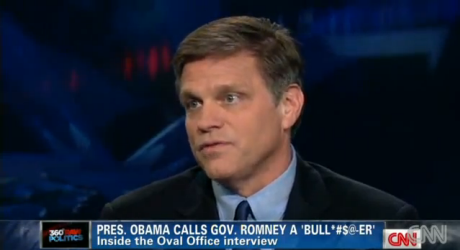 Most of his questions are some iteration of asking Obama: Seriously, how heinous is Mitt Romney? How gross is he? And really, how great are you? Just behold some of the questions which this historian and journalist – given the opportunity for a one-on-one interview with the president of the United States – chose to ask, beginning with the first four of the interview:

“Let’s start with how the campaign has been going. Ever since the first debate, Romney has abruptly shifted his position on a whole host of issues, from his tax plan to financial regulation [that’s the entirety of his first “question”].

“Many observers have commented on how Romney has misrepresented or even changed his positions in this last leg of the campaign – that he’s been like a chameleon on plaid. Do you feel that he has lied to the American people?

“Where were you when you first saw Romney’s speech in Boca Raton about the 47 percent? What was your first reaction?

“What has surprised you the most about the Republican campaign this year?

“You said, ‘a.k.a. Obamacare.’ Do you mind if historians call the achievement Obamacare?

“You sometimes use the term ‘fair shake’. FDR had the New Deal, Lyndon Johnson had the Great Society. Is the Fair Shake something you’d be comfortable with to describe your legacy?

“The auto bailout helped rescue states like Ohio from economic disaster. What, in turn, have you learned from the people of Ohio during your many visits to the state?

“Bill Clinton – how important is he as a surrogate for you? What’s your friendship with him like these days?

“Halloween’s coming up. If you could have Mitt Romney dress in a costume, what should he be for Halloween?”

If nothing else, shouldn’t a concern for his own dignity lead Brinkley to have at least a pretense of adversarial substance? An interview of Obama by White House Press Secretary Jay Carney would have been more challenging. Had Brinkley had more time, next on his list of questions undoubtedly included: “Do you believe Romney is more like Hitler or Satan?”, and “Sir, do you mind that historians will likely see you as a mix of Gandhi and Jesus?”

Ample ink is spilled over debating whether the US media is biased in favor of Republicans or Democrats. It is neither. The overwhelming, driving bias of the US media is subservience to power, whoever happens to be wielding it.

That is what explains why the US media has been so obsequious first with George Bush and now with his Democratic successor (for those who doubt that “the liberal media” venerated Bush as much as Lewis and Brinkely do Obama, I’ll remind you of this still-remarkable, borderline pornographic display of giddy fawning on Mission Accomplished Day, or the fact that Bush’s own Press Secretary wrote a book mocking the US media for how “deferential” it was to the Bush White House). It’s why journalists joyously dance with top officials, swing on their tires, are creepily grateful when they’re sprayed in the face by their squirt guns, and play fun beach games with the very campaign officials they’re ostensibly covering.

The central function, the religion, of the US establishment media is adulation of those who wield power, especially military power as personified by the inaptly referred to “commander-in-chief”. Brinkley conducted the interview in the Oval Office from his knees because – with some significant exceptions – that’s the posture which US media culture assumes in the presence of the royal court.

What makes this most ironic, and most destructive, is that this function is the exact antithesis of what media figures claim they perform and what pioneers of press freedom protections envisioned. The political media is designed to be adversarial because it is supposed to serve as a scrutinizing check on the claims of those in power, not serve as worshipful, propagandistic amplifiers of those claims.

If, as is obviously the case, Brinkley desperately craves Obama’s re-election, that’s fine. But as a journalist and historian, there are all sorts of dubious assertions and controversial actions on the part of the president that merit questioning and challenge. One would think that minimal intellectual curiosity, or at least base professional self-esteem, would prevent someone like Brinkley from completely squandering this opportunity by taking the time he was given to flatter and serve the president.

But one would be wrong. He was given this time and access precisely because the White House knew how and toward what end he would use it. In other words, they knew he was a typical member of the US press corps and his behavior would therefore be reverent in the extreme. One cannot blame the White House for exploiting those eager to spit up hagiography masquerading as journalism. The fault lies with those who deceive the public by holding themselves out as journalists.