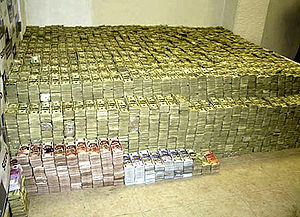 Outgoing Mexican President Felipe Calderon has signed into law a ban on large cash transactions. The ban will take effect in about 90 days and it is part of a broader effort to control monetary flows within the country.

Under the law, a Specialized Unit in Financial Analysis operating within the Attorney General’s Office will be created to investigate financial operations “that are related to resources of unknown origin.”

In 2010, Mexico instituted strict limits on foreign exchange cash transactions to $1,500 per person per month, which caused several cash dollar exchanges to withdraw from the business and had the effect of penalizing tourists.Of course, US dollars are a huge portion of the actual paper cash that this effort is aimed at, but the Mexican peso is the 12th most traded currency in the world and by far the most traded currency in Latin America.

Reuters reported that, “Sales of drugs from marijuana to cocaine and methamphetamine in the United States are worth about $60 billion annually, according to the United Nations. About half of that amount is estimated to find its way back to cartels in Mexico.”

The Woodrow Wilson International Center For Scholars’ Mexico Institute published a comprehensive study in May 2012 entitled “It’s All about the Money.” The report recommended tight integration and coordination with the United States in the areas of legal framework, financial institution regulation, intelligence on cross-border currency flows, and non-conviction based asset forfeiture.

Two years in the making, the new law also requires notaries, real estate brokers, and other dealers to report the forms of payment for transactions above the respective limits. Financial institutions will also be required to report monthly credit card balances in excess of 50,000 pesos ($3,875).