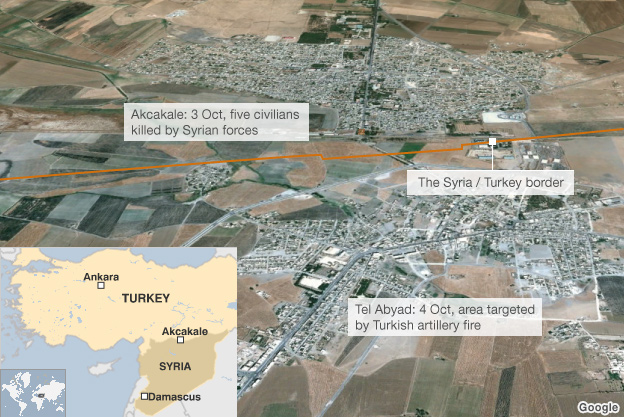 The Turkish-Syrian Skirmish Is Being Taken Out Of Context

The mainstream American press has trumpeted for days the claim that Turkey is “retaliating” for artillery fire coming from Syrian government forces on the Syrian-Turkish border near the town of Akçakale.

Because Turkey is a member of Nato (for 50 years), a declaration of war by Turkey could well drag Nato into a conflict.

The Turkish people don’t like the turn of events … thousands of Turks  took to the the streets in Ankara and Istanbul after Turkey’s parliament approved military operations against targets in Syria following the mortar attacks.

Many alternative news sources claim that this was a “false flag” attack to justify a Turkish attack on Syria.

Indeed, before the mortar attacks, Russia warned of such a possibility:

Russia expresses its concerns about the tense situation on the Syria-Turkey border and warns both to avoid tension.

Russia has urged restraint between Turkeyand Syria so as to avoid possible cross-border conflicts while telling world powers that they should not seek ways to intervene in the Syrian war.

Both Syrian and Turkish authorities “should exercise maximum restraint” since radical members of the Syrian opposition might deliberately provoke cross-border conflicts for their own benefits, Deputy Foreign Minister Gennady Gatilov said yesterday. The diplomat said Moscow has been worrying about the situation on the Syria-Turkey border… Turkey has sent a diplomatic note to Syria over the mortar bomb that hit the southeastern province of Akçakale on Sept. 28.

But another possibility is that Syrian army forces were shooting at Syrian rebels near Akçakale and accidentally fired mortar a tad bit too far … across the border into Turkey.

Indeed, Turkey has been sheltering and training Syrian rebels,  and Akçakale is a key Syrian rebel supply route, which has seen numerous skirmishes in recent months.

Turkey has also been testing Syrian air defenses by sending its fighter jets into Syrian air space, and has threatened intervention for quite a while.

Moreover, in March, the Brookings Institute called for a multi-front assault on Syria to effect regime change, which includes attacks from Turkey. In its report entitled “Assessing Options for Regime Change”, Brookings argued (page 6):

In addition, Israel’s intelligence services have a strong knowledge of Syria, as well as assets within the Syrian regime that could be used to subvert the regime’s power base and press for Asad’s removal. Israel could posture forces on or near the Golan Heights and, in so doing, might divert regime forces from suppressing the opposition. This posture may conjure fears in the Asad regime of a multi-front war, particularly if Turkey is willing to do the same on its border and if the Syrian opposition is being fed a steady diet of arms and training. Such a mobilization could perhaps persuade Syria’s military leadership to oust Asad in order to preserve itself. Advocates argue this additional pressure could tip the balance against Asad inside Syria, if other forces were aligned properly.

The bottom line is that we don’t know whether the recent mortar attacks near Akçakale were a false flag attack by the Syrian rebels to justify war by Turkey against the Asad regime or an attempt by Syrian government troops to hit rebels gone too far, and accidentally ending up in Turkey.

One thing is for sure: this incident can’t be taken in a vacuum, especially since a large proportion of the rebel fighters are Al Qaeda.

– Ron Paul: “What I Fear The Most Is a False Flag – Something Happening Where One of Our Ships Goes Down, Or … a Plane Goes Down, And of Course It HAD To Be The Iranians, You Know, For Sure, For Certain”

Will a False Flag Be the Start of An Iran War?

What I fear the most is a false flag – something happening where one of our ships goes down, or there’s a plane that goes down, and of course it HAD to be the Iranians, you know, for sure, for certain.

(Paul previously warned of a “Gulf of Tonkin type incident” in Iran.)

Paul joins numerous other high-level government officials who have warned that a false flag may be launched against Iran to start a war:

It would be far more preferable if the United States could cite an Iranian provocation as justification for the airstrikes before launching them. Clearly, the more outrageous, the more deadly, and the more unprovoked the Iranian action, the better off the United States would be.Of course, it would be very difficult for the United States to goad Iran into such a provocation without the rest of the world recognizing this game, which would then undermine it. (One method that would have some possibility of success would be to ratchet up covert regime change efforts in the hope that Tehran would retaliate overtly, or even semi-overtly, which could then be portrayed as an unprovoked act of Iranian aggression.)

Many critics have argued that there is a concerted effort to push the United States into a war with Iran by supporters of Israel. Patrick Clawson, director of research for the highly influential pro-Israel Washington Institute for Near East Policy (WINEP) think tank, seemed intent to prove those rumors true this week in comments as a luncheon on “How to Build US-Israeli Coordination on Preventing an Iranian Nuclear Breakout.” Clawson casually discusses how to create a false flag operation to push the U.S. into war to overcome any reluctance by the public. We have been discussing how many leaders like Senator Joe Lieberman had begun to use the same rhetoric that led to the last two wars in Iraq and Afghanistan and how the suggest timing of an attack has been tied to the presidential election.

In his remarks, Clawson helpfully lists a series of historical events used to push the country into war like the Gulf of Tonkin incident that gave us the Vietnam War. Clawson expressed his frustration in acknowledging that it is “[v]ery hard for me to see how the United States President can get us to war with Iran.” However, there is hope. Clawson explains that the “traditional way” to get the country into a war is through false flags or manufactured incidents where Americans are killed. Thus, he observes, “we are in the game of using covert means against the Iranians, we could get nastier about it. So, if in fact the Iranians aren’t going to compromise, it would be best if somebody else started the war.”

The fact that one of the leading analysis for the WINEP would feel comfortable in making such comments is itself quite chilling. It indicates that such discussions have become sufficiently regular that it has creeped into public discussion. It is a measure of the secret pressure building to push this country into a third major war despite our crippling economic conditions and losses in military personnel. The assumption in Washington is that neither Romney nor Obama could oppose such a war. Even if Obama does not publicly support Israel, the assumption is that political allies of Israel in Washington can guarantee that we would offer extensive military loans and intelligence. Even if there is a delay in such military loans and support, the assumption is that Israel can go to war with the understanding that the United States will cover a significant portion of the costs. Moreover, in his remarkably candid remarks, Clawson shows how the U.S. can easily be forced into direct combat by pushing Iran to simply kill some Americans or sink a few of our ships. Then members would be clamoring for revenge. Notably, the Israelis have been ratcheting up the war rhetoric in pushing Iran, which predictably has now reserved the right to engage in a preemptive strike not just against Israeli but U.S. interests. We would then, again, find ourselves in a war without any public debate or collective decision.

While Clawson adds a passing caveat that he is not advocating such an approach, his remarks are clearly designed to show how the group can get the United States into a war for Israel if only we can get Iran to kill some of our citizens or soldiers. Those people are of course expendable props in Clawson’s realpolitik.

By the way, Clawson has been enlisted to give his insightful analysis at the International Monetary Fund and the World Bank. He is also a member of the National Defense University’s Institute for National Strategic Studies. The World Bank connection is particularly interesting given the history with Paul Wolfowitz who pushed the U.S. into two disastrous wars in the Bush Administration and was rewarded with being made the head of the World Bank.

It is the callous disconnect that is most chilling in these remarks. Thousands of U.S. soldiers have died or have been crippled for life in these wars that have left the country near bankruptcy (and increasingly hostile “allies” in Afghanistan and Iraq). Those casualties and costs, however, appear immaterial in the discussion of supporting Israel in war against Iran.

It seems like the U.S., Israel and their allies want to start wars against Syria and Iran as badly as this lion wants to eat this little guy: