“The squeeze is on, and people are doing desperate things,” is how one independent described the situation in California. As Bloomberg reports, a shortage of supply along with drastically higher wholesale prices of gasoline has caused ‘mom-and-pop’ gas stations to close down as their margins are destroyed. Even larger firms, such as CostCo, are closing sites due to the shortages as Los Angeles and San Francisco gas prices jump 30-45c in a few days.As one owner noted: “I can get gas, but it’s going to cost me $4.90 a gallon, and I can’t sell it here for $5,” and another added that “we’re going to start shutting pumps Friday, as gas is costing me almost $4.75 a gallon with taxes. There’s no sense in staying open. The profit margins are so low it’s not worth it.”

The problem is likely a short-term one according to some as the temporary shutdown of local refineries (after Chevron’s Richmond refinery fire) and maintenance is completed but it is clear that even a short-term blip in wholesale prices (whether driven by local supply or global geopolitics) causes pain as it would appear we are close to ‘inelastic’ levels of demand.

California gas has not fallen as the national average has… 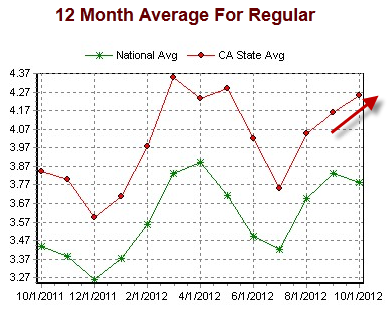 Gasoline station owners in the Los Angeles area including Costco Wholesale Corp. (COST) are beginning to shut pumps because of supply shortages that have driven wholesale fuel prices to record highs.

Costco’s outlet in Simi Valley, 40 miles (64 kilometers) northwest of Los Angeles, ran out of regular gasoline yesterday and was selling premium fuel at the price of regular, Jeff Cole, Costco’s vice president of gasoline, said by telephone. The company hasn’t been able to find enough unbranded summer-grade gasoline to keep its stations supplied, he said.

A Chevron Corp. (CVX) oil pipeline shut down last month, an Oct. 1 power failure at Exxon Mobil Corp. (XOM)’s Torrance refinery and units down at other plants have cut supplies in the market.

Spot California-blend gasoline, or Carbob, in San Francisco surged 30 cents to $1.40 a gallon over futures, also the highest level since at least 2007, at 1:12 p.m. New York time.

“We’re going to start shutting pumps Friday,” Sam Krikorian, owner of Quality Auto Repair in North Hollywood, said by phone yesterday. “Gas is costing me almost $4.75 a gallon with taxes. There’s no sense in staying open. The profit margins are so low it’s not worth it.”

Exxon’s 150,000-barrel-a-day Torrance refinery may flare gases for a week as it restores production after a power failure that shut some units and slowed output from others, Gesuina Paras, an Exxon spokeswoman in Torrance, said by e-mail Oct. 2.

Phillips 66 (PSX) is also scheduled to perform maintenance on process units at its Rodeo and Los Angeles refineries this month, people familiar with the schedules said.

Chevron’s 240,000-barrel-a-day Richmond plant, the largest refinery in Northern California, has been running at reduced capacity since a fire Aug. 6.

“The squeeze is on, and people are doing desperate things,” Bob van der Valk, an independent petroleum industry analyst in Terry, Montana, said by e-mail yesterday. “The mom- and-pop gas stations are having to close down from either not being able to obtain gasoline from their regular distributor or cannot afford the break-even price of almost $5 per gallon.”

“Everybody is concerned about what might happen,” he said. “The real question is: How long is this going to last and what can the state do?”

The independent gas station owners are typically the first to run out of fuel and shut their pumps when spot prices surge because they often lack long-term contracts to buy from fuel suppliers at set prices, McKeeman said.

“It’s a combination of low inventories and multiple California refinery problems,” said Tom Robinson, head of Robinson Oil Corp. “Really since the Chevron Richmond fire, inventories have been tight. As other refinery problems occur, there isn’t much or any available inventory.

“Retailers are not yet reflecting the wholesale price increases they have experienced, so unless supply problems improve quickly, retail prices will definitely be going up.”

1 thought on “Wholesale Gasoline Shortage In California Causes Gas Stations To Shut Down: Hoarding Next?”