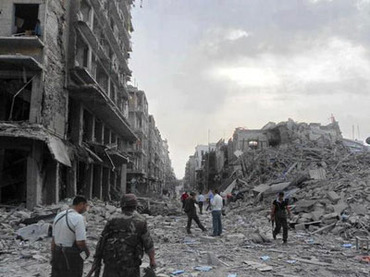 Syrian state TV reports of three powerful explosions in downtown Aleppo, the financial hub and largest city of the country. Reportedly the blasts were caused by car bombs that terrorists delivered to the city’s main square.

The London-based Syrian Observatory for Human Rights says that activists on the ground report 40 fatalities and 72 injured in the terror act, most of them military servicemen.

The Saadallah al-Jabri square in central Aleppo where the first three explosions took place is currently controlled by government forces.

Most of the victims of the blasts are civilians. Luckily enough, the three cars on Saadallah al-Jabri square went off early in the morning when the municipal buildings were empty. The House of Officers has reportedly been completely destroyed. Rescuers continue to clear up the debris and the number of victims may grow.

The al-Nusra Front, an Al-Qaeda-linked group, has taken responsibility for the attacks, local media report.

Terror acts like this are not common in Aleppo. The first one happened in February, when two suicide car bombers attacked security compounds in Aleppo’s industrial center killing 28 people. Since then, there have only been two similar attacks.

­The extensive use of explosives in Syria indicates an increasing strength of jihadist groups, including Al-Qaeda, in Syria, believes Khuram Iqbal, co-author of Pakistan Terrorism Ground Zero. The presence of Islamic radicals in Syria has been admitted by the UN and various international agencies.

“What’s happening in Syria these days reminds me of Afghanistan back in 1979, when the Western democracies supported international jihad against the Soviet Union. Back then the Western capitals were able to confront the Soviet Union, but the long-term consequences were really devastating for the regional and international peace,” recalls Iqbal, warning against supporting rebel movements because of unpredictable consequences.

Explosive terrorist acts on the streets of Syrian cities do not bring considerable tactical advantage to the rebel groups because they risk losing any popular support in the country and on the part of the international community, Iqbal believes.