Whereas earlier today we presented one of the most exhaustive presentations on the state of the student debt bubble, one question that has always evaded greater scrutiny has been the very critical default rate for student borrowers: a number which few if any lenders and colleges openly disclose for fears the general public would comprehend not only the true extent of the student loan bubble, but that it has now burst. This is a question that we specifically posed a month ago when we asked “As HELOC delinquency rates hit a record, are student loans next?” Ironically in that same earlier post we showed a chart of default rates for federal loan borrowers that while rising was still not too troubling: as it turns out the reason why its was low is it was made using fudged data that drastically misrepresented the seriousness of the situation, dramatically undercutting the amount of bad debt in the system.

Luckily, this is a question that has now been answered, courtesy of the Department of Education, which today for the first time ever released official three-year, or much more thorough than the heretofore standard two-year benchmark, federal student loan cohort default rates. The number, for all colleges, stood at a stunning 13.4% for the 2009 cohort. The number is stunning because it is nearly 50% greater than the old benchmark, which tracked a two year default cohort, and which was a “mere” 8.8% for the 2009 year. Broken down by type of education, and using the new improved, and much more realistic benchmark, for-profit institutions had the highest average three-year default rates at 22.7 percent, with public institutions following at 11 percent and private non-profit institutions at 7.5 percent. In other words, more than one in five federal student loans used to fund private for-profit education, is now in default and will likely never be repaid!

Another that quietly reported today on the change in the Department of Education’s default tracking methodology was Bloomberg in “Student-Loan Default Rates Soar as Federal Scrutiny Grows.” Needless to say, it was not impressed, because the new data indicated that there had been a concerted push by all sides to misrepresent the severity of the student debt problem, by over 50%. The “why” is quite simple:

The Education Department has revamped the way it reports student-loan defaults, which the government said had reached the highest level in 14 years. Previously, the agency reported the rate only for the first two years payments are required. Congress demanded a more comprehensive measure because of concern that colleges counsel students to defer payments to make default rates appear low.

“Default rates are the tip of the iceberg of borrower distress,” said Pauline Abernathy, vice president of The Institute for College Access & Success, a nonprofit based in Oakland, California.

On the stump, President Obama has touted an executive order that eases the process for applying for a loan program that lets students make lower payments tied to their income — easing their burden and making it less likely they will default.

Under the new three-year measure, colleges with default rates of 30 percent or more for three consecutive years risk losing eligibility for federal financial aid. Schools can also be barred from the program if the rate balloons to 40 percent in a single year. The sanctions don’t take effect until results are released in 2014.

There it is again: a mega-government which gives amply with one hand, and yet with the other skews the incentives in the system to represent reality as far better than it truly is. One way to underwhelm reality and to soothe the blow of the true extent of the popped student loan bubble was using a shorter data cohort.

Some for-profit colleges encourage students to defer
payments in their early years, in an effort to keep down default rates that could jeopardize their federal funding, according to a report by the Senate Committee on Health, Education, Labor and Pensions released in July.

The report accused for-profits of using the tactic to manipulate their default rates. It singled out the role of SLM Corp. (SLM), the largest U.S. student-loan company commonly known as Sallie Mae. A subsidiary, General Revenue Corp. counsels for- profit colleges on keeping down default rates. University of Phoenix, owned by Apollo Group Inc. (APOL), is a customer, according to the Congressional report

Whether or not the reason for the government to demand more accurate data was to scapegoat the private sector yet again, what it did instead if expose just how deep the student loan hole already is. Because now that we know the revised default data, we can put it together with the recently revised as of a month ago revised total student loan notional number. Recall from the Fed:

The revisions to the data are fairly substantial: as of our August report, 2011Q2 student loan balances were reported at $550 billion. We now estimate that student loans outstanding in that quarter (2011Q2) amounted to $845 billion, $290 billion or 53.7% higher than we reported earlier. These previously excluded loans were also missing from the total debt outstanding; as a result, our estimate of total debt outstanding in 2011Q2 is also revised upward by $290 billion (2.5%).

This is what student debt looked like a month ago when we first reported the data: 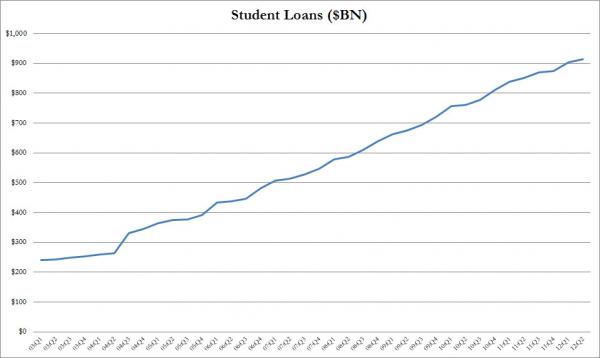 One can see why everyone in the Federal administration has been so reticent about disclosing the true state of the Federally-funded student loan bubble. Because if one simply assumes the rising default rate has kept constant across all recent cohorts since the updated 2009 number, it would mean broadly speaking, that of the $914 billion in Federal Student Loans at least 13.4% will end up in default. Over $120 billion.

Of course all else is never equal: Federally funded student loans are now increasing at a rate of over $60 billion per quarter. This means that in just about 18 months, the total size of the Federal student loan market will hit $1.3 trillion. Why is that number important? Because that is how big the subprime market was at its peak in late 2007, when everything went to hell and the last credit bubble popped. From Responsible Lending:

As can be seen on the table above, 20% of all subprime mortgages was then expected to default (the ultimate number ended up being far higher). Note that as mentioned above, already over 22% of for-profit student loans are in default.

In other words, the Federal student loan bubble has not only popped, but has all the carbon copy makings of the next subprime crisis. Only when it pops it won’t be New Century and Countrywide Financial on the hook: it will be all of America’s taxpayers. Remember: these are Federal loans.

And the biggest problem: unlike housing where there is always at least some recovery of collateral, as the house remains, with student debt there is no recoverable asset as the asset is a human being. Granted said human effectively becomes a debt slave courtesy of the non-discharge nature of the student loan, which can not be wiped out even with a personal bankruptcy, but assuming the taxpayer can recover any money using discounted garnished wage flows of what are effectively perpetual(ly discouraged) debt slaves of the system, is simply idiotic.

We give Bernanke at most 2 years before everyone is aware of the true extent of not only the student debt bubble, but that it has already popped, at which point student loans will be the next “asset” to be monetized by the Federal Reserve.