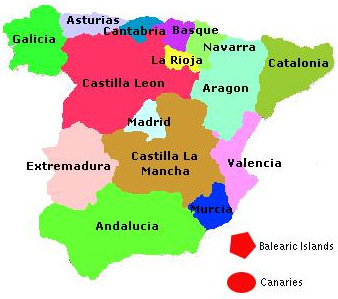 Via ANSAmed: Spain: Catalan Parliament will vote on right of independence

(ANSAmed) – Madrid, September 24 – The parties which played a central role in the National Day of Catalonia on September 11, 2012 are now working on a statement on the right of the Catalan people to cut off the tie with the Spanish state.

The resolution will be voted on Thursday by the regional parliament, at the end of the general debate due to start tomorrow. To the writing of the resolution on sovereignty, which is not binding, are participating the following parties: Convergencia i Union (CiU), the ruling party in the Generalitat, with 62 deputies; Iniciativa (ICV-Euia), with 10 deputies; Esquerra Republicana (ERC), 10 deputies, the independents of Solidaritat, 3 deputies, and Joan Laporta.

The Popular Party (PP) (18 deputies) and Ciutadans (3) are against the initiative, while the Socialist Party (PSC, 28) proposes to move towards the construction of a federal state.

According to Spanish media, the statement won’t be only a proposition, as others rated in the past by the Catalan room, but goes further, and expresses “the will of Catalan people to vote on the bond with the State of Spain”.

In addition to this, it opens the way for forthcoming elections which may already take place on November 25, and a referendum on the sovereignity of Catalonia, claimed by parties supporting a national indipendence. A decision which, as indicated by the Catalan President Artur Mas, must be taken by the majority of the Parliament.

After the refusal of the government of Mariano Rajoy of a fiscal pact with Catalonia – a privileged system of financing, such as those in the Basque Country and in Navarre – Mas said that it was time to take a step forward, even with the a referendum for indipendence.

For his part, the Secretary General of Convergence (CDC), Oriol Pujol, declared to be “skeptical about a dialogue” suggested on Saturday by Prime Minister Rajoy, to check the possibility of an agreement on the financing of Catalonia. He also urged the Prime Minister to take initiative and “Do not play with the feelings of the Catalans”.

According to La Vanguardia, the model for the new Catalonia would be Scotland. (ANSAmed).

Via El Economista: (Google Translate’d) But military warn of the consequences of promoting “fracture of Spain”

Spanish Military Association (SMA) has warned Monday that those who cooperate or allow “fracture” of Spain should “respond with all the utmost rigor” in the courts in the field of military courts by the “serious charge high treason. “

In a statement, the association warns that “the highest office” and “governments” should take “appropriate action immediately to remove any hint of secession without armed forces look serious and unpardonable in tessitura to comply scrupulously strictly with the mission and that the Constitution gives them to ensure the sovereignty, independence and territorial integrity of our country. “

“If it had unfortunately-warn-act, there must be no doubt that those who have allowed, participated or assisted in reaching this last time but repeated threat of fracture of Spain, by commission, omission or out of your constitutional positions shall be accountable to the fullest extent of all so serious charge of treason before the courts in the field of military jurisdiction. “

For this association, the attitude of the president of the Generalitat of Catalonia, Artur Mas, and members “separatists” of Parliament is “inappropriate and unacceptable” and “not consistent with any of the ways with the duty and responsibility as representatives of the state, are required to observe and exercise “.

According to AME, current events in Catalonia are the result of “a frightening economic crisis and other manifestly disastrous political management by the formations that incur a high treason to voluntarily maintain a system of electoral representation that encourages the emergence and establishment of separatist nationalism to give in to his blackmail votes to stay in power. “

This association, which is not registered in the Register of Professional Associations of members of the Armed Forces, created in light of the Bill of Rights and Duties of the military-is chaired by retired Colonel Leopoldo Munoz and is mainly composed of former members of hosts and Navy.