There was a time about a year ago, before the second Greek bailout was formalized and the haircut on its domestic-law private sector bonds (first 50%, ultimately 80%, soon to be 100%) was yet to be documented, when it was in Greece’s interest to misrepresent its economy as being worse than it was in reality. Things got so bad that the former head of the Greek Statistics Bureau Elstat, also a former IMF employee, faced life in prison if convicted of doing precisely this.A year later, the tables have turned, now that Germany is virtually convinced that Europe can pull a Lehman and let Greece leave the Eurozone, and is merely looking for a pretext to sever all ties with the country, whose only benefit for Europe is to be a seller of islands at Blue Aegean water Special prices to assorted Goldman bankers (at least until it renationalizes them back in a few short years). So a year later we are back to a more normal data fudging dynamic, one in which Greece, whose July unemployment soared by one whole percentage point, will do everything in its power to underrepresent its soaring budget deficit.

Case in point, on Friday the Finance Ministry proudly announced its budget deficit for the first eight months was “just” €12.5 billion, versus a target of €15.2 billion, leading some to wonder how it was possible that a country that has suffered terminal economic collapse, and in which the tax collectors have now joined everyone in striking and thus not collecting any tax revenue, could have a better than expected budget deficit. Turns out the answer was quite simple. According to Spiegel, Greece was lying about everything all along, and instead of a €12.5 billion deficit, the real revenue shortfall is nearly double this, or €20 billion, a number which will hardly incentivize anyone in Germany to give Greece the benefit of another delay, let along a third bailout as is now speculated.

To quote Greg House: “Everybody lies”

The gap in the Greek national budget is greater than previously expected. According to a preliminary Der Spiegel finding, the troika of European Commission, European Central Bank and International Monetary Fund reported that the government of Prime Minister Antonis Samaras is missing currently around 20 billion euros – nearly twice as much as last admitted. Only if the funding gap is closed, the next EU tranche will be transferred to Athens.

What is well-known is that for all intents and purposes Greece has already stopped trying:

That Greece can bridge the financing gap on its own seems unlikely. The already adopted austerity program has encountered great opposition in the population. In one published study in Athens on Saturday 90 percent of survey respondents declared that the new reform package go almost exclusively to the detriment of the poorer sections of the population. Only 33 percent also believe that the new cuts in the social network can not solve the country’s problems would be. Nevertheless, 67 percent of respondents argued that Greece remains in the euro zone.

But at what cost? Already 8000 people in Athens alone have to resort to soup kitchens to find some food in a country in which there are virtually no opportunities left to make a living.

Sure enough, in a world in which no politician has any credibility left, it took Greece a few short hours to issue its canned response to the allegation that it has been making up numbers all along… as usual. Per Dow Jones:

Now we just need two more denials to have no doubt that every number out of that particular economic basked case is a lie. Which we don’t now. Don’t forget: this is what the Greek Finance Ministry looks like: 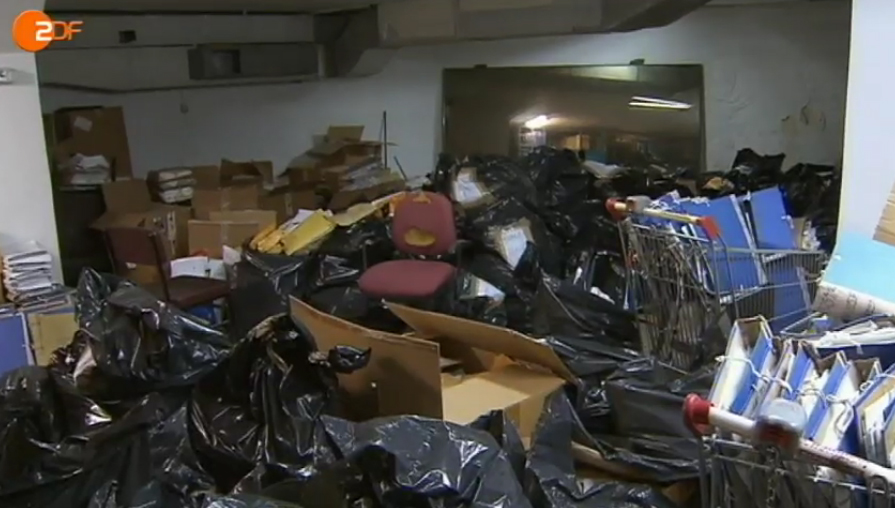 And the kicker of course is that as reported on Friday, Europe is now desperate to not rock the boat ahead of the Obama reelection, because as Reuters reported all of Europe wants to give Obama a second term. Which makes sense: in a world of wealth redistribution, it will be only fair that America, which has taken the place of China as the world’s growth dynamo, and where fund flows out of Europe have pushed the S&P to a few percentage point shy of all time highs, will repay its reelection debt to Europe for avoiding reality as long as possible, by “sharing” US taxpayer funding, from those who for one reason or another still pay taxes, with its European proletariat cousins and bailout all of Europe’s insolvent countries on Uncle Sam’s tab yet again, starting just after November 6, 2012.

Because it’s only “fair.”