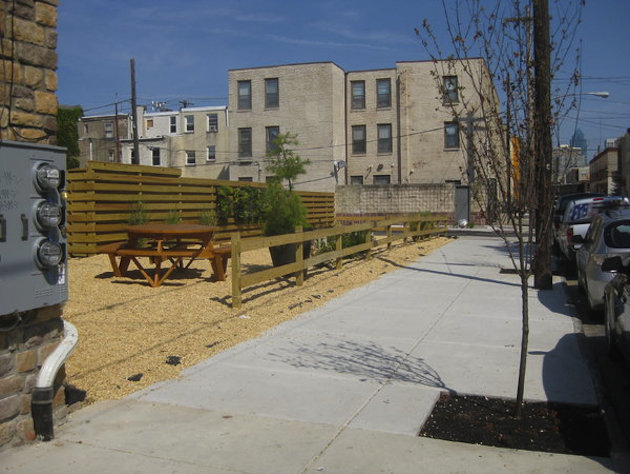 This lot was recently home to 40 tons of trash until a local businessman cleaned it up.

A business developer in the Philadelphia neighborhood of Point Breeze is facing legal action after voluntarily cleaning up more than 40 tons of trash from a vacant lot neighboring his local business.

As the old adage goes, no good deed goes unpunished. Ori Feibush says he visited the local offices of the Philadelphia Redevelopment Authority four times, sent in seven written requests and made 24 phone calls to the agency asking them to take care of a major eyesore: an empty lot next to his coffee shop was home to more than 40 tons of debris.

Not only did the agency fail to act but it also denied Feibush’s offer to clean up the mess himself.

But the Daily News reports that Feibush went ahead with his plans anyway, reportedly spending more than $20,000 of his own money not only to remove the trash but also to level the soil; add cherry trees, fencing and park benches; and repave the sidewalk.

However, the city agency was less excited, demanding that Feibush return the vacant lot to its previous condition and saying it is considering legal action against him.

“Like any property owner, [the authority] does not permit unauthorized access to or alteration of its property,” Paul D. Chrystie, director of communications at the Office of Housing and Community Development told the paper. “This is both on principle (no property owner knowingly allows trespassing) and to limit taxpayer liability.”

And the situation is not without irony. Feibush says he received a citation in August 2011 from the city for litter on the same lot that the city now points out is not his property.

Nonetheless, the city’s request puts Feibush in an unusual position. In theory, he committed a good deed, investing his own time and money to improve the condition of his neighborhood when city authorities refused to step up to the plate. But he also knowingly did so after the city refused his request to intervene.

Supporters of Feibush have started a petition over at Change.org asking the city to “thank” him rather than considering legal action against him.

The situation is almost like a reverse case of eminent domain, in which a private owner is attempting to revitalize a piece of public property.

For his part, Feibush thinks the city agency is jealous.