Curious why nearly 4 years ago to the day Ben Bernanke and Hank Paulson told Ken Lewis to purchase Merrill Lynch “or else” (but to make sure everyone gets paid their bonuses bright and early with no cuts)? It certainly had to do with the stock price and preserving the wealth of the shareholders. It had little to do with making the company viable in the long run, unfortunately, as the just announced news of a massive tsunami of 16,000 imminent terminations at the company confirms. All BofA did then was to take on dead weight at gunpoint, which it now has to shed. It also shows that despite rumors to the contrary the US economy is not getting better, the US financial system is not getting stronger, faith in capital markets is not returning (based on future staffing needs at banks), US tax revenues by the highest earners will go down, and the closed loop that is a procyclical economic move will just get worse as there are fewer service providers providing financial services, in the process taking out less consumer debt to keep the GDP “growing.” What will also happen by January 1, 2013 is that BofA will no longer be America’s largest employer, with the total headcount of 260,000 at year end being the lowest since 2008, and smaller than JPM, Citi and Wells.Charting the sad decline of the very appropriately named bank: 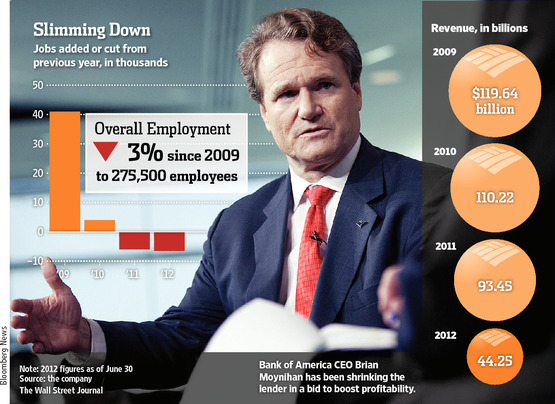 The reductions for the final six months of the year, outlined in a document given to top management, are part of a larger effort to retool Bank of America into a leaner and more focused enterprise. The plan is designed to make the company take less risk, generate more revenue out of existing customers and use an investment banking operation inherited from Merrill Lynch & Co. to become a major deal maker around the world.

On Main Street, the refocused company will have fewer branches and a smaller mortgage operation, the document shows.

Chief Executive Brian Moynihan is trying to speed the company’s transformation into a smaller and more efficient operation as he tries to persuade investors that expenses can be adjusted to compensate for revenue lost to new regulations, an uneven economy and shaky markets. Since becoming CEO in 2010, he has shifted away from a nationwide expansion strategy embraced by his predecessors Hugh L. McColl Jr. and Kenneth D. Lewis, and shed many of the businesses that he considers to be nonessential.

Hitting the new staffing target would fulfill a year early Mr. Moynihan’s pledge to slash the bank’s workforce by approximately 30,000.

“If they want to make any headway toward improving profitability,” said Sterne Agee & Leach Inc. senior banking analyst Todd Hagerman, “they need to accelerate the timeline.”

In the run-up to the financial crisis, Bank of America’s staff rolls ballooned as the company acquired rival financial institutions and pushed into every corner of the financial system, culminating in the 2009 purchase of Merrill Lynch.

But the 2008 acquisition of Countrywide Financial Corp. turned Bank of America into a huge mortgage lender just as the U.S. housing market collapsed, and left the company more exposed to any other major bank to the severe economic downturn that followed.

While most of the cuts are expected to come from the side of the bank that deals with Main Street, according to the document provided to management, the company has also culled some of its less-experienced investment bankers.

Through the end of the second quarter, Bank of America had reduced the ranks of junior investment bankers by 23% since September 2011, according to the document.

So while BAC shareholders may be happy for a few hours as even more costs are shed (even if at the expense of future revenues), the biggest loser is once again the US taxpayer, as 16,000 taxpayers (from the highest tax bracket) no longer pony up for the “common good.” One day, though, we are certain that BofA will do everything in its power to repay the Treasury and taxpayers for the fact that it is even still around. Just not yet.