Anti-American violence and hatred is spreading: first Egypt, then Libya, with very tragic consequences, now Yemen. From Reuters: “Hundreds of Yemeni demonstrators stormed the U.S. embassy in Sanaa on Thursday in protest at a film they consider blasphemous to Islam, and security guards tried to hold them off by firing into the air. The attack followed Tuesday night’s storming of the United States Consulate in Benghazi, where the ambassador and three other staff were killed. President Barack Obama said the perpetrators would be tracked down and ordered two destroyers to the Libyan coast, but there were fears protests would spread to other countries in the Muslim world.” And since the US will not retaliate against any of these attacks on what is technically US territory except with “strong condemnation”, expect many more retaliations against America in the middle east in the days ahead as blowback finally blows up. Also, will the US warships headed to Libya now be redirected to Yemen or the next country that decided to burn down its US mission? 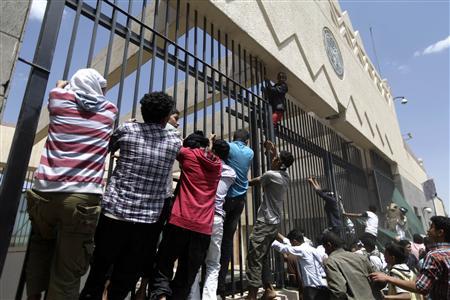 Young demonstrators shouting “we redeem, Messenger of God” smashed windows of the security offices outside the embassy with stones and burned cars before breaking through the main gate of the heavily fortified compound in eastern Sanaa. Others held aloft banners declaring ‘Allah is Greatest’.

Tyres blazed outside the compound and protesters scaled the walls.

“We can see a fire inside the compound and security forces are firing in the air. The demonstrators are fleeing and then charging back,” one witness told Reuters.

Witnesses said there were some injuries on both sides but gave no exact figures.