– US: The Real Unemployment Numbers Are Worse Than You Are Being Told

The U.S. economy added just 96,000 jobs in August, falling short of expectations and showing that with a presidential election just two months away, the nation still has a long ways to go to heal from the deep 2007-09 recession. The unemployment rate fell to 8.1 percent from 8.3 percent, but that was only because 368,000 people left the labor force. The share of working-age people who are either working or looking for work—known as the labor-force participation rate—fell to its lowest level since September 1981.
Participation in the Labor ForceShare of population in workforce lowest since 1981. 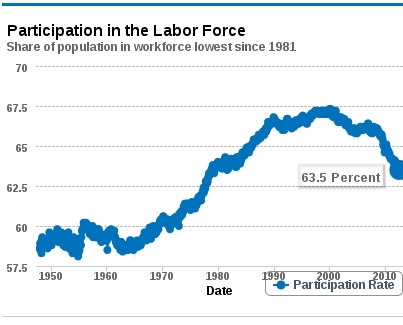 Stock and bond prices rose after the report came out, but it wasn’t because traders felt cheerful about the economy. Just the opposite: They concluded that the lousy report increased the likelihood that the Federal Reserve would further ease monetary conditions at its next meeting Sept. 12-13. Easy money is reliably good for the financial markets, even if it doesn’t quickly translate into stronger economic performance. “It’s just this new upside-down world of investing that we’re living in where bad news is good news for assets,” Michael Mullaney, who helps manage $9.5 billion as chief investment officer at Fiduciary Trust in Boston, told Bloomberg.

The unemployment rate has been above 8 percent since February 2009, a month after Obama’s inauguration—the longest period of such elevated joblessness since the Great Depression of the 1930s. Obama acknowledged the economy’s weakness in accepting the Democratic nomination on Thursday, saying, “Yes, our road is longer, but we travel it together.” He argued that his plan to rebuild the economy “may be harder but it leads to a better place.”

The job market is even weaker than the official unemployment rate indicates because it misses people who aren’t even looking for jobs. People who are not actively searching for employment aren’t counted as unemployed. And Americans have been dropping out of the labor force in record numbers—claiming disability, staying in school, sitting at home, or simply retiring as the baby boom moves into its golden years. The labor force generally grows along with the growth of the overall population. But there’s been a sharp drop in the rate of labor force participation since 2007, especially in the 16-24 age group. Getting more education is a sensible, if expensive, alternative to looking for a job in that cohort. As I wrote in this week’s Bloomberg Businessweek cover story, “Debt for Life,” college attendance this fall is projected to be up 19 percent from the fall of 2007.

If the share of the population that’s in the labor force were as high now as it was when the recession began in December 2007—and if none of those people who flooded back in found work—then the August unemployment rate would have been 11.6 percent rather than 8.1 percent.

The Federal Reserve Bank of Atlanta has created a handy Jobs Calculator website that allows users to calculate how rapidly payrolls need to expand to get unemployment back to a given level. To get the jobless rate back down to 6 percent would take three years of monthly job gains averaging 193,000, for example, assuming no change in the rate of labor force participation. If labor force participation rebounded to 66 percent, which it was in December 2007, it would take an absurdly high 334,000 jobs created each month to get the jobless rate down to 6 percent in three years.

The August jobs report contained lots of evidence of weakness. Not only was the five-digit job growth below the 130,000 median estimate of economists surveyed by Bloomberg, but the July total was revised downward to 141,000, from 163,000. The June number was revised down to 45,000 from 64,000. Average hourly earnings for all employees on private nonfarm payrolls fell by 1 cent in August to $23.52. Manufacturing employment fell by 15,000, paced by an 8,000 decline in motor vehicles and parts. That had been expected because auto manufacturers laid off fewer workers for factory retooling than usual in July, so the August recall was smaller than usual.