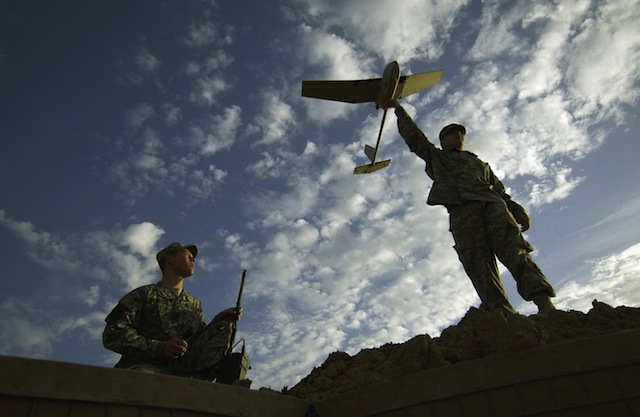 Killer drones just keep getting smaller. The Army wants to know how prepared its defense-industry partners are to build what it calls a “Lethal Miniature Aerial Munition System.” It’s for when the Army needs someone dead from up to six miles away in 30 minutes or less.

How small will the new mini-drone be? The Army’s less concerned about size than it is about the drone’s weight, according to a recent pre-solicitation for businesses potentially interested in building the thing. The whole system — drone, warhead and launch device — has to weigh under five pounds. An operator should be able to carry the future Lethal Miniature Aerial Munition System, already given the acronym LMAMS in a backpack and be able to set it up to fly within two minutes.

The envisioned LMAMS, a “loitering precision guided munition” is designed for quick missions to take out specific targets, and the Army’s had its eye on something like it for years. Its small size means it can’t carry a lot of fuel. As first reported by (subscription only) InsideDefense, the Army needs it to stay aloft for a half hour at most. But during that half hour, the Army expects it to fly up to six miles to smash into a target, either directed by a human controller or pre-programmed through GPS. Whether it speeds to a target fairly distant from where an Army unit is set up or loiters over one until it gets a clear shot, it’s another step toward making drone strikes inconspicuous.

The Army wants it ready for use by 2016 at the latest. But it may not take that long — since the Army’s already got something similar to LMAMS.

There are basically three models for shrinking the drone war. One is to build a tiny munition, so as to weaponize existing small spy drones, like the Raven or the Puma. Raytheon’s doing that with its Small Tactical Munition, a two-foot bomb that weighs about 10 to 15 pounds. A second is to take the existing functionality and physical specs of existing killer drones and scale it down, as with California company Arcturus’ eponymous 17-foot armed spy plane. The third is to mash up drones and missiles, so a controller remotely pilots a tiny missile and guides it on a one-way mission to a target. That’s what AeroVironment’s much-hyped Switchblade does.

LMAMS is more like the Switchblade than the other two. It’s not designed for more than one use. “Once a target is selected by the operator in the terminal phase of an engagement,” the pre-solicitation reads, “no further operator input shall be required.” Accordingly, its spy tools are minimal: The Army just needs the soldier operating it from a distance to receive real-time video of the LMAMS’ flight path. And like the Switchblade, since the drone/missile hybrid is small, it ought to cause minimal collateral damage: The Army needs LMAMS to have an “extremely low probability” of killing someone 10 meters from its bomb’s impact.

In fact, the LMAMS sounds so similar to the Switchblade that the Army’s flirting with redundancy. The only major discrepancy between what the Army wants for LMAMS and what the Switchblade does is that the Switchblade’s loiter time tops out at 10 minutes, which is too short for the “unprecedented engagement of enemy combatants” that LMAMS envisions. (The Switchblade can also fly a span of six miles.) Still, the Army has sunk nearly $10 million into Switchblade since last September, and an AeroVironment vice president told InsideDefense, “Switchblade would be the Aerovironment solution that applies to this.”

Still, the missions that the Army wants the LMAMS to complete are fairly specific. It should be used for discrete targets: “personnel and personnel in moving light-duty vehicles, while minimizing collateral damage,” the pre-solicitation reads. So when Army units — small ones, since the Army wants LMAMS “organic to the small unit level” — spot a specific combatant or suspicious vehicle, a soldier is supposed to launch the LMAMS and direct it at the target, and only the target. Its limited flight range, loiter time and camera power restricts its use as an overhead spy tool for scouting those targets. Given the drawdown in Afghanistan, chances are the “small units” who’d operate the LMAMS will be special-operations teams, unless another ground war breaks out unexpectedly.

The LMAMS is just the latest development in miniaturizing drones. The Air Force’s “micro-aviary” is at work building small aircraft modeled on insects and tiny birds, the better for spying without attracting notice. LMAMS doesn’t care so much about watching an adversary for any prolonged period — when it finds one, though, the Army wants it killed, and quickly.