Noel Sharkey, professor of artificial intelligence and robotics at the University of Sheffield, said the robot was “an incredible technical achievement, but it’s unfortunate that it’s going to be used to kill people”.

“But of course if it’s used for combat, it would be killing civilians as well as it’s not going to be able to discriminate between civilians and soldiers.”

A robot called Cheetah has set a new world speed record for legged robots, running faster than the fastest human.

The headless machine, funded by the Pentagon, reached 28.3mph (45.5km/h) when tested on a treadmill.

The project is part of efforts to develop robots for military use. One robotics expert told the BBC that it was “unfortunate” the Cheetah was made primarily “to kill people”.

It has been created by the Massachusetts robotics company Boston Dynamics and backed by the US Defense Advanced Research Projects Agency (Darpa).

According to Darpa, the aim is to “more effectively assist war fighters across a greater range of missions”.

The Cheetah, which is powered by a hydraulic pump, broke its own record of 18mph (29km/h), recorded in February.

“The Cheetah had a slight advantage over Bolt as it ran on a treadmill,” Darpa said in a statement, “but most of the power Cheetah used was to swing and lift its legs fast enough, not to propel itself forward.”

The agency plans to test the robot in the field in 2013.

The machine’s design has been inspired by the real cheetah, the fastest land animal, which can reach speeds of 75mph (121km/h). 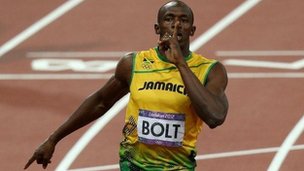 “Our Cheetah bot borrows ideas from nature’s design to inform stride patterns, flexing and unflexing of parts like the back, placement of limbs and stability.”

“What we gain through Cheetah and related research efforts are technological building blocks that create possibilities for a whole range of robots suited to future Department of Defense missions.”

Noel Sharkey, professor of artificial intelligence and robotics at the University of Sheffield, said the robot was “an incredible technical achievement, but it’s unfortunate that it’s going to be used to kill people”.

“It’s going to be used for chasing people across the desert, I would imagine. I can’t think of many civilian applications – maybe for hunting, or farming, for rounding up sheep.

“But of course if it’s used for combat, it would be killing civilians as well as it’s not going to be able to discriminate between civilians and soldiers.”