If one needs a shining example of why the days of Europe’s artificial currency are numbered, look no further than the EU’s poorest country which moments ago said “Ne Mersi” to the Eurozone and the European currency. From the WSJ: “Bulgaria, the European Union’s poorest member state and a rare fiscal bright spot for the bloc, has indefinitely frozen long-held plans to adopt the single currency, marking the latest fiscally prudent country to cool its enthusiasm for the embattled currency. Speaking in interviews in Sofia, Prime Minister Boyko Borisov and Finance Minister Simeon Djankov said that the decision to shelve plans to join the currency area, a longtime strategic aim of successive governments in the former communist state, came in response to deteriorating economic conditions and rising uncertainty over the prospects of the bloc, alongside a decisive shift of public opinion in Bulgaria, which is entering its third year of an austerity program. “The momentum has shifted in our thinking and among the public…Right now, I don’t see any benefits of entering the euro zone, only costs,” Mr. Djankov said. “The public rightly wants to know who would we have to bailout when we join? It’s too risky for us and it’s also not certain what the rules are and what are they likely to be in one year or two.“

When a parasitic technocrat asks to shake your hand, you refuse: 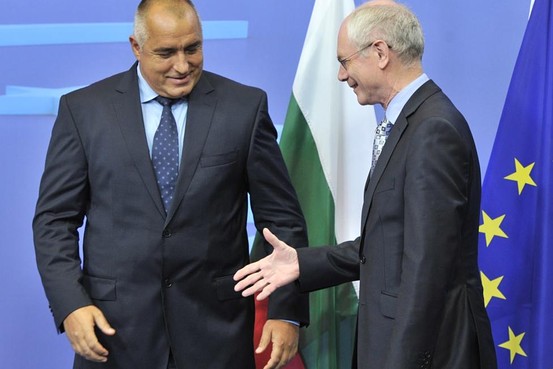 Of course, Bulgaria is right: at this point the only “upside” to new EMU entrants is for the unelected Brussels technocrats, who are now the butt of every possible joke, to demand said countries hand over their middle class’ wealth in order to bailout Greece, Portugal, Ireland, Spain, Italy and all the rest of the “wealthy and developed.” And since. in trader jargon, by not being “long” the euro, Bulgaria is effectively “short” it, expect to hear some rather disparaging statements emanating out of Europe’s insolvent core vis-a-vis the poor nation shortly.

Prime Minister Boyko Borisov said concerns had been heightened by growing disputes between policy makers, some of whom back Germany’s call to give priority to fiscal discipline over growth, while others want a more expansionary policy.

“I’m certain that we will definitely see a deepening divide in Europe now because many governments are not prepared to stomach the difficult decisions they have to take. It’s like a spoilt child who doesn’t want to go to the dentist to fix his bad teeth, even though the operation is needed,” Mr. Borisov said. “This moment is critical for the euro zone and for the EU,” he added.

Mr. Djankov said that Bulgaria’s economy should still expand by around 1.5% this year, but warned that the euro zone could face up to five years with “zero growth” if national leaders continue to mull policy responses to the crisis instead of fully backing Germany’s call to continue strict fiscal consolidation.

On the periphery of the euro zone, but overwhelmingly dependent on the bloc’s larger economies for growth, Bulgaria has thus far managed to weather the euro crisis. The economy last year grew by a modest 1.7% and the European Bank for Reconstruction and Development expects that to slow to 1.2% this year. Unemployment has risen to over 12%, but that is around half the levels in Greece and Spain, while Russian investment in the Black Sea resorts is rising rapidly.

But Bulgaria’s exposure to the deteriorating health of the euro zone has been compounded in recent months by mounting problems of other economies on its borders.

The paradox is that when Greece finally succumbs to reality, and is forced (or opts) out of Europe and the EMU, the biggest beneficiary will be Bulgaria, as billions in capital are redirected toward it from the “poor” country’s southern neighbor, for whom the future is so bleak, rumors of a military coup make the rounds every other day.

As to why Bulgaria is slowly becoming the model for Europe, here is a brief extract from a Bloomberg article which explains why taking the pain and sufferening now, and administering true austerity, even if it means total losses of wealth for those who are not prepared for hyperinflation (which Bulgaria had for a long period of time in the 1990s) instead of deferring pain via unrepayable debt, always leads to beneficial consequences:

In 1989, the Soviet bloc collapsed. A new Bulgarian democracy was born, but with no money in the state treasury to pay for it. The nation’s savings were insignificant, shops were empty, unemployment was high and infrastructure was rudimentary. Austerity was just a fact of life.

After seven years of delayed reforms, booming private businesses and an almost complete lack of regulation, hyperinflation came to Bulgaria in 1996 and again wiped out the nation’s savings, forcing the closure of a third of the country’s banks. As a result, the lev — Bulgaria’s currency — was pegged to the deutsche mark (later to the euro), and the central bank was banned from lending to commercial banks, a precaution that remains in place today. The International Monetary Fund requires that all Bulgarian currency in circulation should be fully matched by foreign-exchange reserves.

The decade of 1989-1999 was harsh, but it turned Bulgaria into a disciplined nation of savers — even after the country joined the EU in 2007. The banking sector is financed by these savings accounts, which provide a healthy Tier 1 capital- adequacy ratio of 15.8 percent. Credit-card penetration is extremely low — Bulgarians prefer cash.

Being poor is no fun, of course. Public-sector employees are badly paid and retired people struggle to survive with their low pensions. Not a single motorway has been completed to link one end of Bulgaria with another and only parts of the subway in the capital, Sofia, work. This is the price to pay for not spending money that isn’t yours to improve your lot, at the level of the state and of the individual consumer.

But today Bulgaria has positive economic growth and the second-lowest state debt in the EU (after Estonia) at 16 percent of gross domestic product. It also has a manageable budget deficit of about 2 percent of GDP, despite levying a flat corporate and personal income tax of just 10 percent. Foreign- exchange reserves amount to 6 percent of GDP. In short, the country has a future.

Greeks, by contrast, have been spending more than they earn for the last 20 years. Once an employee entered the public sector, he couldn’t be laid off; he received 40 days’ vacation per year; and he was paid 14 months out of 12, with guaranteed annual raises. Greeks are richer as a result, but that lifestyle is not sustainable. Debt to GDP is 165 percent and the budget deficit is an unmanageable 9.1 percent.