Also, according to ABC, the shooting was apparently a result of a “workplace dispute”:

A workplace dispute that erupted in gunfire left as many as ten people have been injured, at least four of them shot, near the Empire State building in Midtown.

A fire department spokesman says it received a call about the shooting just after at 9 a.m. Friday and that emergency units were on the scene at Fifth Avenue and West 34th Street within minutes.

Breaking news that the 5th Avenue and 34th street area in New York has been closed after 5 people were shot outside of the Empire state victim, including the gunman. According to police scanner reports, the perpetrator has been shot by NYPD ans is is DOA on scene, with EMS assistance requested.

Two people have been killed and at least eight others were wounded in a shooting outside of the Empire State Building in New York City on Friday, according to a New York police source.

One of the dead was the shooter, the source said, adding that there was no apparent link to terrorism.

Authorities said emergency personnel received a call about the shooting at Fifth Avenue and 34th Street just after 9 a.m.

The circumstances of the shooting weren’t immediately clear. The conditions of the people shot also weren’t known.

At least one person was seen being taken away in a stretcher.

And from Fox NY:

There are reports of multiple people shot outside the Empire State Building.  FOX 5 News has learned that at least three people have been shot. The scene is chaotic as people make their way to work in the heavily trafficked area. One person is in police custody. FOX 5 News and SkyFoxHD are headed to the scene.  MyFoxNY.com is updating this story.

Live webcam from the SkyFox helicopter: 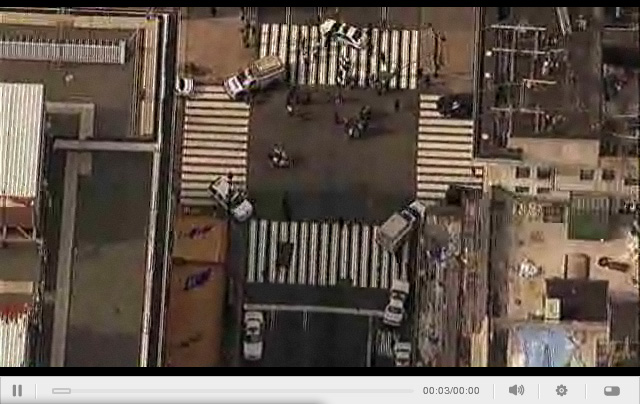