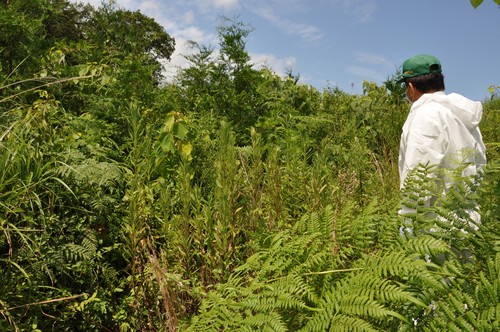 A forest area near the Fukushima No. 1 nuclear plant is covered in a jungle of weeds, burying a forest of cedar saplings, in the Fukushima Prefecture town of Okuma. (Mainichi)

Forcing his way through the bush near the Fukushima No. 1 nuclear plant on Aug. 9, Kimio Akimoto, head of the Futaba regional forestry cooperative, surveyed a rough mountainside.

“If degrading of the mountain progresses, a natural disaster will certainly occur,” he says.

The forest in Okuma, Fukushima Prefecture, contaminated with radiation from the Fukushima nuclear disaster, has become overgrown with weeds. Unless the prefecture’s forests are decontaminated, it will become impossible to maintain the mountains within a 20 kilometer radius of the damaged nuclear plant on a long-term basis.

Dressed in a radiation suit, Akimoto struggled to find a privately owned forest that the forestry cooperative is in charge of looking after.

“It should be around here somewhere,” he murmured.

Cedar saplings were planted on a slope in the area in neat rows, but the mountainside has since turned into a jungle of weeds that stand taller than he does.

The saplings are about 80 centimeters tall. But they are covered by Canada goldenrod plants and ferns, and the trees are growing more slowly than normal. Hardly any sunlight reaches the saplings, and their trunks are thin.

“If the undergrowth isn’t removed for another two years, the saplings will choke and die,” he says.

Undergrowth needs to be cleared away from cedar and cypress saplings once a year for five years after they are planted; otherwise weeds will steal their sunlight and they will wither.

According to the Forestry Agency’s Iwaki forest administration office, among other sources, about 80 percent of Fukushima Prefecture’s Futaba district is covered in forest — a total of about 65,178 hectares. Last year, workers had planned to clear undergrowth away from saplings in an area measuring roughly 300 hectares, but were unable to do so as a result of the nuclear disaster.

If trees wither, then the ground becomes unstable, making landslides and flash floods more likely. Akimoto, who has spent time in forests for over 40 years as a worker for the Fukushima Prefecture village of Kawauchi, has many times witnessed disastrous scenes when people have abandoned forests. Now, radiation is also a problem.

“Contaminated materials from the mountains reach inhabited areas, rivers and the sea, so decontamination of the mountains is necessary. But we know better than anyone that it’s hard to get far into the mountains where there are no paths, and there’s no way you can wash down every tree and dig up the soil,” he says.

“What are we going to do about the mountains that are becoming overgrown? As residents start to return, that worries me,” he says.

The Futaba regional forestry cooperative lost its work contract to administer forests in the Futaba district before the March 11, 2011 Great East Japan Earthquake and tsunami that triggered the Fukushima nuclear crisis. It now seems that decontamination of forests will be set aside when decontamination work goes ahead, and the future of the forests accordingly remains uncertain.

Radiation readings near the saplings struggling to get sunlight were a little over 40 microsieverts per hour. After just one day in the area, a person would be exposed to more than the government’s designated yearly limit of 1 millisievert.

Facing the mountain, Akimoto lowered his head as he spoke to the saplings.