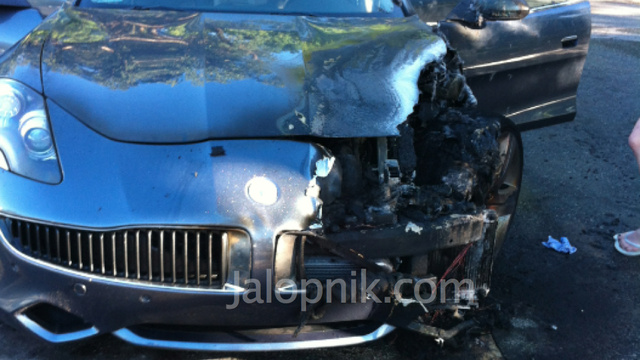 Last week we reported on the searing woes plaguing the Karma “supercar” of green automaker Fisker, following the most recent episode of automotive spontaneous self-immolation. In fact, things for the company that has so far received $529 million in federal subsidies are so bad that also last week Fisker announced its third CEO hire in the past year (when in a supremely ironic move it hired the former head of the Chevy Volt program Tony Posawatz). As of last night things just went from bad to even worse, following the inevitable next step: a total recall of all Karmas currently on the road. Oh well: nothing that burning, quite literally, severeal hundred more million in taxpayer funding won’t solve.

Fisker is again recalling the Fisker Karma hyrbid-electric luxury vehicle after the most recent fire was linked to a faulty cooling fan. There are approximately 1,000 of these EVs on the road and two fires so far this summer.

The most recent fire occurred when an owner parked his car at a Woodside, California grocery store. By the time he was done getting the groceries his car was already on fire. This was the second incident for government-financed Fisker.

Earlier this summer a brand new Fisker was blamed for a house fire.

This is also the second recall from Fisker over a possible fire risk following the recall of approximately 240 vehicles due to an improperly-positioned hose clamp.

Fisker sent an investigator to check out the car and determined a coolant fan near the front wheel well of the car was the cause.

Fisker Media Statement
The investigation located the ignition source to the left front of the Karma, forward of the
wheel, where the low temperature cooling fan is located. The final conclusion was that
this sealed component had an internal fault that caused it to fail, overheat and start a
slow burning fire.