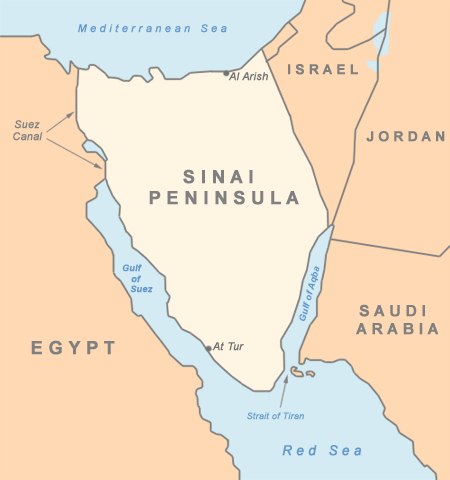 While the geopolitical focus is once again all over Iran and Israel, it may be time to take a quick look Egypt, where the recently elected, and pro-US president Mohamed Mursi is “preparing to use aircraft and tanks in Sinai for the first time since the 1973 war with Israel in its offensive against militants in the border area.” Reuters continues: “The plans to step up the operation were being finalised by Egypt’s newly appointed Defence Minister General Abdel Fattah al-Sisi as he made his first visit to Sinai on Monday following the killing of 16 border guards on August 5. Egypt blamed the attack on Islamist militants and the conflict is an early test for President Mohamed Mursi – elected in June following the overthrow last year of Hosni Mubarak – to prove he can rein in militants on the border with Israel. “Al-Sisi will supervise the putting together of final plans to strike terrorist elements using aircraft and mobile rocket launchers for the first time since the beginning of the operation,” an Egyptian security source said. Another security source said the army was planning to attack and besiege al-Halal mountain in central Sinai, using weapons including tanks, where militants were suspected to be hiding.” Of course, what can possibly go wrong in the middle east once a government decides to escalate military expansion against militant terrorists. Look for crude to rise ever higher, and for SPR release rumors to hit the tape daily as yet another market is ensnared in price controls ahead of the election.More:

Another security source said the army was planning to attack and besiege al-Halal mountain in central Sinai, using weapons including tanks, where militants were suspected to be hiding.

Disorder has spread in North Sinai, a region with many guns that has felt neglected by the central government, since the overthrow of Mubarak in a popular uprising. Mubarak’s government had worked closely with Israel to keep the region under control and Islamist President Mursi has promised to restore stability.

The 1979 peace treaty between both countries limited military presence in the desert peninsula though in recent years Israel agreed to allow Egypt to deploy more forces there to stem weapons smuggling by Palestinian gunmen and other crimes.

After the border attack this month, Egypt launched a joint army-police operation that has raided militant hideouts, arrested their members and seized weapons.

Israeli officials, who say they are in regular contact with Cairo, have encouraged Egypt to take tough action against the gunmen responsible for the assault and have previously allowed the use of helicopters in the operation.

And more in depth:

Sisi was sworn in as commander-in-chief of the army and defense minister on Sunday, becoming the nation’s first defense minister not to hold the field marshal army rank, coming instead from the country’s military intelligence unit, according to Ahram Online.

It is also likely no coincidence that Sisi formerly served as commander of the country’s north, including the troublesome Sinai region, where the Egyptian military just launched military airstrikes for the first time in three decades following the recent killing of 16 Egyptian border guards.

Such claims were quickly denied by SCAF, according to Daily News Egypt. But the rumor could see new life with President Morsi being the Muslim Brotherhood’s presidential candidate and all. Still, who knows.

Sisi is also believed to be among the youngest, if not the youngest member of the ruling military council, and indeed is nearly two decades younger than his 75-year-old predecessor Tantawi, who lead the country’s armed forces since 1991.

Tantawi and Sisi also both worked as military attachés, according to Ahram Online, Sisi having served Saudi Arabia and Tantawi in Pakistan.

Look forward to escalating news flow out of the Sinai, and, of course, to new all time highs in Brent in EUR, and soon in any currency.