The face of Yemeni deli clerk Mutahar Murshed Ali was slashed nearly in two for committing that most grievous of offenses: refusing to “sell” a Colt 45 to a drunk 20 year-old in exchange for foodstamps (whose usage Zero Hedge readers know, recently reverted back to all time highs). Of course, Ali was perfectly in his right to refuse to exchange booze for EBT: we reported recently that “New York would prohibit welfare recipients from spending their tax-funded benefits on cigarettes, alcohol, gambling, and strip clubs under a bill passed overwhelmingly by the state Senate.” That however appears to not have bothered the assailant, who nearly cut off the deli vendor’s face off in retaliation for not getting the “entitled” quid-pro-handout.From NY Daily News:”His face almost fell off,” said witness Abdul Bin Ock, 17. “His cheek ripped. There was so much blood. Every time he looks in the mirror, he has to see the same scar the rest of his life,” Ock added. The suspect fled the blood-spattered bodega on Broadway near Gates Ave. — and is being hunted by cops. Ali, a married father from Yemen, was rushed to Kings County Hospital, where he received multiple stitches… The slasher “was drunk, falling and stumbling.” Prior to the confrontation, Ali said, he saw the man receive cash from an underage girl outside the store. Ali believes the man was planning to buy the beer for the girl — and make money on the deal by using his food stamp card.”

As for Ali: did the cut up foreign father and husband file for immediate disability benefits (for which he is ineligible)? “A shaken-up Ali returned to the store hours later.“ 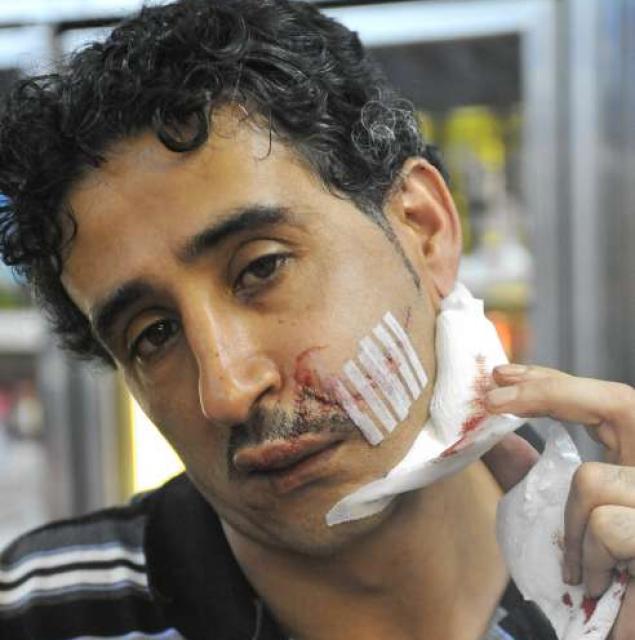 “It happened so fast,” Ali told The News. “He took the knife out of his pocket and it happened.”

A dramatic video obtained by The News shows Ali sitting in a chair behind the counter before the assailant slyly pulls out his blade. In a flash, he flops onto the counter and cuts open the helpless clerk’s face.

The suspect was described as a black man between the ages of 25 and 30, with short black hair and brown eyes, wearing black jeans and a white T-shirt — and carrying a black backpack.

And the video of the robbery: