When observing the trends in the housing market, one has two choices: i) listen to the bulls who keep repeating that “housing has bottomed”, a false mantra which has been repeated every single year for the past four, or ii) look at the facts. We touched briefly on the facts earlier today when we presented the latest housing starts data:construction of single family residences remains 46 percent below the long-term trend; the more volatile multifamily houses is 15 percent below trend and demand for new homes 47 percent below. This is indicative of reluctance by households to make long-term investments due to fear of another downturn in housing prices. Bloomberg summarizes this succinctly: “This historically weak demand for new homes is inhibiting the recovery of demand for construction workers as well, about 2.3 million of whom remain without work.” But the best visual representation of the housing “non-bottom” comes courtesy of the following chart of homes in negative or near-negative equity, which via Bloomberg Brief, is soared in Q4, and is now back to Q1 2010 level at over 13.5 million. What this means is that the foreclosure backlog and the shadow inventory of houses on the market could be as large as 13.5 million in the future, which translates into one simple word: supply. 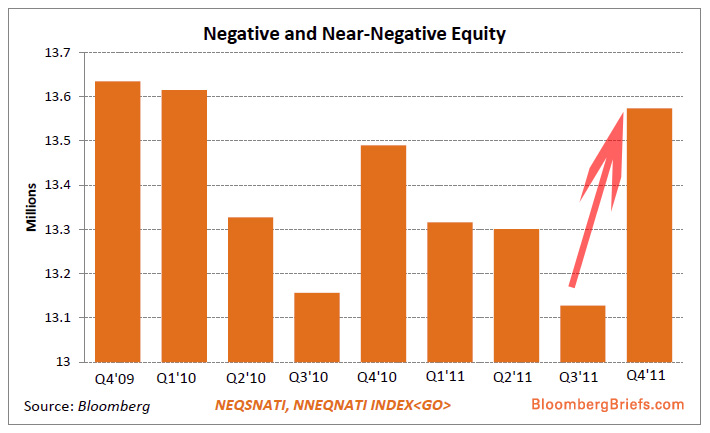 Here is Bloomberg’s Joseph Brusuelas on this topic:

Approximately 13.5 million households hold negative or near-negative equity positions on their mortgages. Many of them will likely lose  those homes to foreclosures, which are again on the rise. At best, an increase in foreclosures will constrain a recovery in prices; at worst, a flood of inventory to market will put further downward pressure on prices.

In other words it is Bloomberg, not us, coming up with the perfectly logical idea that a number as large as the total number of underwater mortgages may and will end up on the market as foreclosures, which in turn will clog up the market clearance piping for years, if not decades to come.

So who is to blame for this ongoing market clearing failure, which lately is evident in every single market place where fair clearing is prohibited due to visible and invisible hands? Why the Fed of course. But don’t take our word: after all when it comes to the Fed’s endless (and catastrophic) attempts at central planning, we are “biased.” Instead, here is Bloomberg again:

Counter-intuitively, the Fed’s low interest rate policy has probably reduced the cost of carrying non-performing debt and mortgages that are either underwater or soon will be. Low interest rates are probably serving as an incentive for those holding underwater mortgages or near-negative equity positions to refrain from selling their homes at discounted prices, which would facilitate in clearing the market.

Housing, along with autos, is one of the most interest-rate sensitive sectors in the economy. The blockage of the monetary transmission mechanism due to the overhang of supply has severely constricted the Fed’s low interest rate policy relative to what has traditionally occurred in post recessionary business cycles. Five years after the housing crash, perhaps it is time to ask hard questions about the efficacy of continuing the emergency policies that were appropriate in 2008-2009. The longer these policies remain in place, the greater the distortion they may cause in the housing market and the broader economy.

Conversations about what to do with the massive non-performing inventory sitting on the balance sheets of banks, the millions of households clinging to homes that are not in their economic interest to keep and the implementation of policies necessary to find the price at which the housing overhang begins to clear are long overdue.

Overdue, yes, and the hard questions and even harder answers will come but, sadly, not before the housing, and every other market, has had another forced liquidation to catch up to fair clearing prices, and to finally overthrow the Fed’s artificial attempts at distorting this and every other market in existence. In other words, nothing at all will change until the next crash. Until then enjoy the game of musical chairs, in which the Pied Piper of Marriner Eccles has no choice but to keep playing until the bitter end. Chuck Prince said it best, a few months before the last great market crash: “So long as the music is playing, you’ve got to keep dancing. We’re still dancing.“