The July retail sales beat came as a surprise to many: an 0.8% increase (full series here) at a time when the data was supposed to grow at less than half this would surely be indicative of a potential turnaround in the US economy. Then we decided to do a quick spot check if maybe the Census Bureau had not adopted one of the BLS’ worst habits: fudging seasonal adjustment factors. The reason for this is because we happened to notice that Not Seasonally Adjusted (full series here) retail sales data in July actually declined by 0.9% from $405.8 to $402 billion. Of course, if the Census Bureau was using a consistent, or at least remotely comparable July seasonal adjustment factor as it has in the past, this would make sense and we would move on. So we decided to look at what the July seasonal adjustment variance over the past decade has been. What we found would have shocked us if indeed this is not precisely what we expected: with the July seasonal adjustment factor routinely subtracting a substantial amount from the NSA number, averaging at -$5.2 billion, in 2012, for the first time this decade, the seasonal adjustment not only did not subtract, but in fact added “value” to the NSA number, resulting in a seasonally adjusted number that was $1.9 billion higher than the NSA number at $403.9 billion. 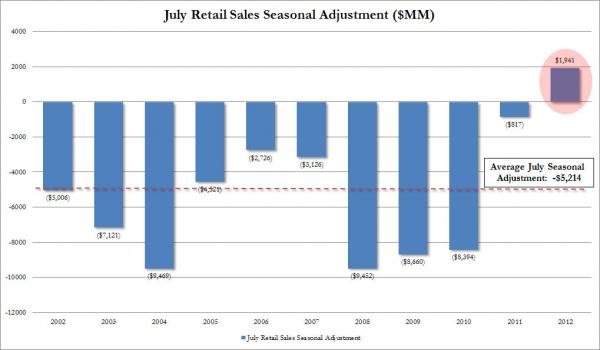 So what would have happened if instead of arbitrarily deciding to add a seasonal contribution for the first time in a decade, the Census Bureau had used the last decade average factor of $5.2 billion (not adjusted for inflation, so the end number would be far greater)? Instead of rising by 0.8% Seasonally Adjusted retail sales would have declined from $400.7 billion to $395.5 billion, or a 1.3% decline.

And that is how data is fudged.

Those curious what the model behind this now glaringly obvious seasonal adjustment fudge is, read on (source):

We use the X-12 ARIMA program to derive the factors for adjusting data for seasonal variations and, in the case of sales, for trading-day and holiday differences.

Adjustment of estimates is an approximation based on current and past experiences. Therefore the adjustments could become less precise if current competitive pressures, changes in consumer buying patterns during holiday periods, and other elements introduce significant changes in seasonal, trading-day and holiday patterns.

More information about the X-12 ARIMA Program is available on the Census web site at http://www.census.gov/srd/www/x12a/ .