Back in 1885, to much fanfare, the General Act of the Berlin Conference launched the Scramble for Africa which saw the partition of the continent, formerly a loose aggregation of various tribes, into the countries that currently make up the southern continent, by the dominant superpowers (all of them European) of the day. Subsequently Africa was pillaged, plundered, and in most places, left for dead. The fact that a credit system reliant on petrodollars never managed to take hold only precipitated the “developed world” disappointment with Africa, no matter what various enlightened, humanitarian singer/writer/poet/visionaries claim otherwise. And so the continent languished. Until what we have dubbed as the “Beijing Conference” quietly took place, and to which only Goldman Sachs, which too has been quietly but very aggressively expanding in Africa, was invited. As the map below from Stratfor shows, ever since 2010, when China pledged over $100 billion to develop commercial projects in Africa, the continent has now become de facto Chinese territory. Because where the infrastructure spending has taken place, next follow strategic sovereign investments, and other modernization pathways, until gradually Africa is nothing but an annexed territory for Beijing, full to the brim with critical raw materials, resources and supplies. So while the “developed world” was and continues to deny the fact that it is broke, all the while having exactly zero money to invest in expansion, China is quietly taking over the world. Literally. 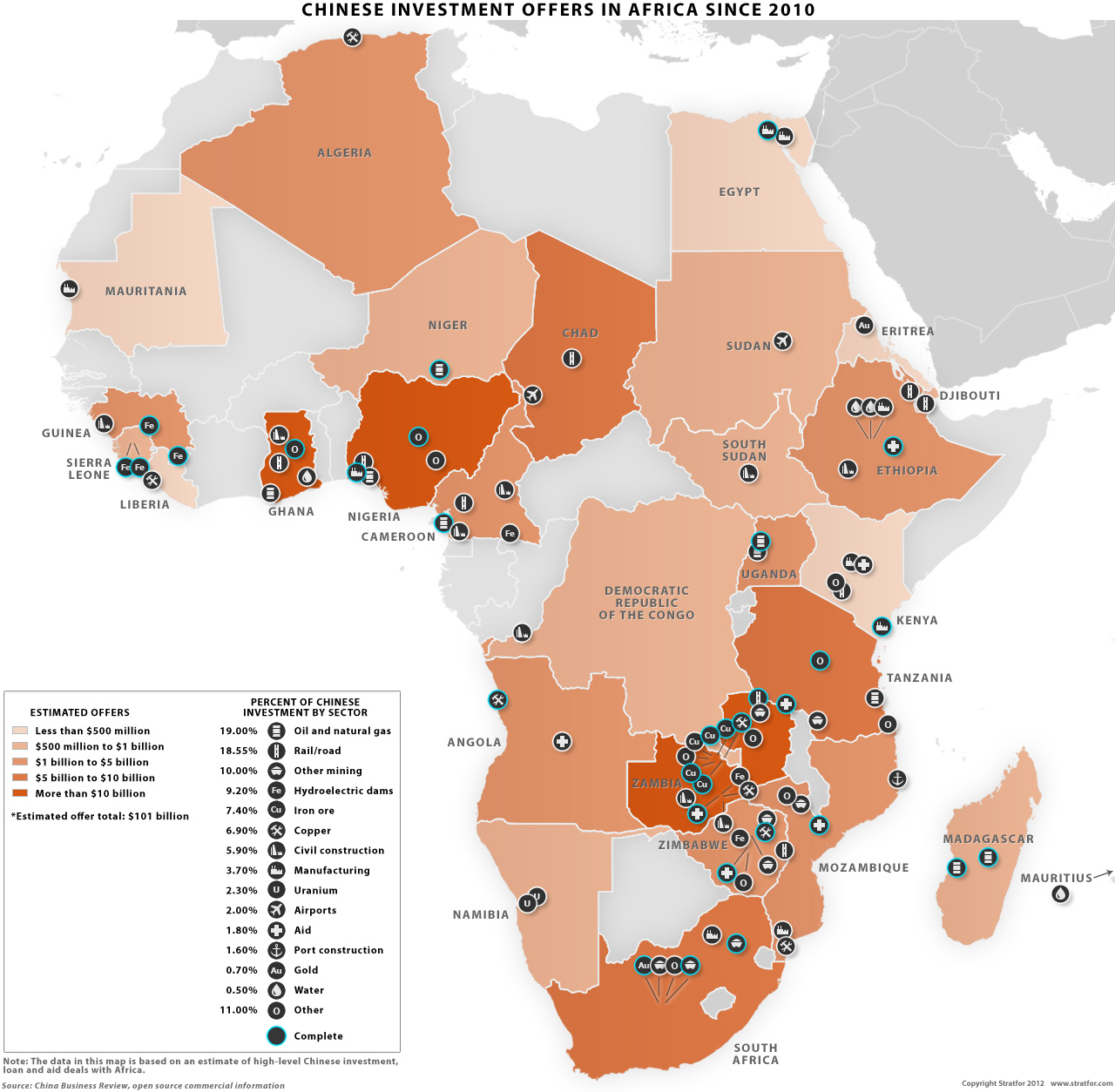 In late July, Beijing hosted the 5th Forum on China-Africa Cooperation, during which China pledged up to $20 billion to African countries over the next three years. China has proposed or committed about $101 billion to commercial projects in Africa since 2010, some of which are under negotiation while others are currently under way. Together, construction and natural resource deals total approximately $90 billion, or about 90 percent of Chinese commercial activity in Africa since 2010. These figures could be even higher because of an additional $7.5 billion in unspecified commitments to South Africa and Zambia, likely intended for mining projects. Of the remaining $3 billion in Chinese commercial commitments to Africa, about $2.1 billion will be used on local manufacturing projects. While China has proposed $750 million for agriculture and general development aid and about $50 million to support small- and medium-sized business development in addition to the aforementioned projects, it has been criticized for the extractive nature of its relationship with many African countries, as well as the poor quality of some of its construction work. However, since many African countries lack the indigenous engineering capability to construct these large-scale projects or the capital to undertake them, African governments with limited resources welcome Chinese investments enthusiastically. These foreign investment projects are also a boon for Beijing, since China needs African resources to sustain its domestic economy, and the projects in Africa provide a destination for excess Chinese labor.

1 thought on ““The Beijing Conference”: See How China Quietly Took Over Africa”