Whether or not the European deterioration is real or not, one thing is certain: FX traders aren’t sticking around to bet on a rebound. As of Friday, the net non-commercial position in the EUR currency was at -173,869 contracts or the biggest net short in history, surging by 30k contract over the prior week, and by a record 70k contracts in the past two weeks as things in Europe unwound rapidly. The short position is greater than the last such record hit back on January 24, when the net short was -171K, and the LTRO effect was yet expected to take hold. Naturally, with such a massive surge in shorts in a short period of time, this means that the likelihood of major short squeezes is substantial on even the most innocuous of news, such as a G8 summit which promises much but delivers nothing, or China once again saying it will gladly focus on growth (as opposed to what? non-growth?). Our advice to FX trading readers: be very careful with EURUSD stops: it is very likely that in their pursuit of short covering squeezes, (BIS) algos will take the pair substantially into the offer-side stop limit buffer just to force short hands out, which in turn may initiate short-term covering ramps. Which would be great for Europe – after all what better indication of the viability of the continent than some algos tripping over each other and generating momentum. 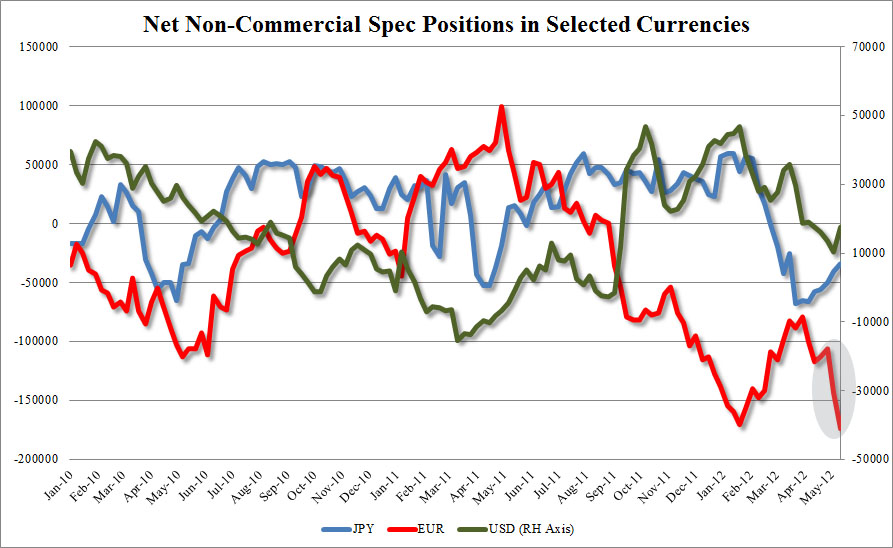