Update: some additional color from MNI, as Europe scrambles for damage control:

The European Financial Stability Facility (EFSF) is expected to approve an E18 billion recapitalization disbursement for Greek banks within the next four days, and the banks should get the money within a week, a senior Eurozone official told MNI Wednesda.

Earlier today MNI reported that the European Central Bank was growing nervous about delays in the recapitalization program for Greece and was threatening to suspend its lending to Greek banks as a means of expediting the decision.

“This has been a point of concern for the last month, and it was debated during Monday’s Eurogroup meeting, where ECB President Mario Draghi and EFSF head Klaus Regling were present,” the official said. “Up until then, the EFSF had sided with the Greek Financial Stability Fund, which was delaying the recapitalization process because it disagreed with certain points of the assessment of Greek banks’ eligibility for the funds,” he explained.

Just as we predicted moments ago, and as Dutch Dagblad warned overnight:

The European Central Bank has stopped monetary policy operations with some Greek banks as they have not been successfully recapitalized, euro zone central bank sources said on Wednesday.

The ECB only conducts its refinancing operations with solvent banks. With no access to ECB funds, the banks concerned must go to the Bank of Greece for emergency liquidity assistance (ELA).

It was unclear exactly how many banks were affected.

One person familiar with the matter said four Greek banks’ capital was so depleted they were operating with negative equity capital. According to its own rules, the ECB cannot provide liquidity to banks in such a situation.

The beginning of the end? Or just more political posturing? In the meantime, EURUSD tumbles. 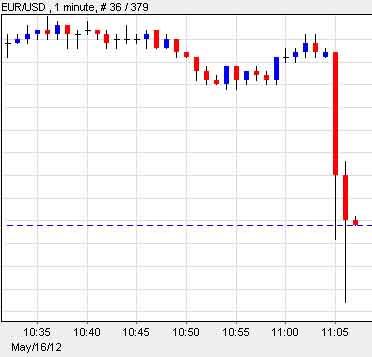