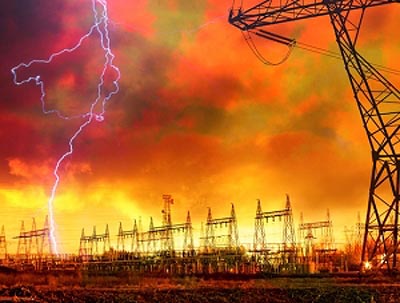 – Expert Warns: 100% Certainty of Total Catastrophic Failure of the Entire Power Infrastructure Within 3 Years (The Coming Depression, May 6, 2012):

As smart grid metering systems expand across the developed world, many are starting to ask whether the threats posed by the new devices, which officials promise will save energy and reduce end user utility costs, outweigh their benefits. In addition to documented health concerns resulting from radiation emissions and no cost savings being apparent, opponents of the technology argue that smart meters are violative of basic privacy rights and give the government yet another digital node of unfettered access to monitor and control personal electricity consumption.

Now, an alarming new documentary suggests that security problems with the inter-connected and seemingly convenient smart grid may be so serious that they could lead to a catastrophic failure of our nation’s entire power infrastructure.

In an interview for the upcoming documentary titled Take Back Your Power, Cyber defense expert David Chalk warns that our nation is in crisis. Not only are our smart power grids susceptible to hacking, but they may very well already be infected with Trojan viruses and back doors that will ultimately lead to disastrous consequences:

The front door is open, and there is no lock to be had.

There is not a power meter or device on the grid that is protected from hacking, if not already infected with some sort of Trojan horse than can cause it to be shut down, damaged or completely annihilated.


We can’t take a massive outage all at once.

Physical equipment can be damaged… watch some of the videos of cyber attacks on generators and other devices. You’ll see they’re actually damaged. Multi million dollar machines are hacked into.

We look at corporations. We look at the very companies like Symantec that are there to protect us having been hacked, and their code is in the public domain.

Bring forward a technology and I will show you that it’s penetrable. I’ll do it on national TV, I’ll do it anywhere… I can guarantee you 100% that there is nothing out there today – nothing – that can’t be penetrated.

We need safety and security, and today that does not exist in the smart grid.

“Unless we wake up and realize what we’re doing, there is 100% certainty of total catastrophic failure of the entire power infrastructure within 3 years,” said Chalk.

“This could actually be worse than a nuclear war, because it would happen everywhere. How governments and utilities are blindly merging the power grid with the Internet, and effectively without any protection, is insanity at its finest.”

As Mr. Chalk points out, even the top security firms in the country have been hacked, and the head of US Cyber Security confirms that military systems are under constant attack and have been broken by hackers who have gained access to sensitive military and space agency systems (including active Jet Propulsion Labs spacecraft). Our entire drone fleet, yet another node in the ever expanding control grid, was recently compromised by a virus that was able to log access commands and passwords for high security military systems. The vulnerabilities of these systems became starkly clear when Iran’s military broke global positioning encryption and took control of a U.S. military drone over their airspace.

This is no longer about a single computer going down or file directories being accessed. Cyber conflict is moving into an entirely new realm, where rogue hackers or state-sponsored cyber operations are capable of targeting physical grid infrastructure like power, water, and oil refineries, commerce and transportation systems. According to one expert, such an attack has the potential bring down life as we know it in America in a matter of just 900 seconds.

Some would argue that we need more governance over the grid system, or stricter penalties for those who compromise it, or further yet, more monitoring and tracking so attacks can be prevented.

The other option, however, is that we take individual Americans off the traditional grid altogether by empowering them through tax credits and de-regulation, so that every one of us can have their own personal smart grid in their home, independent of intervention from government or traditional energy industry players.

Only this limited government, personal responsibility solution is capable of providing a truly impenetrable level of power grid safety and security for each and every person in the United States.

However, like all things government, the narrative seems to be to first create the problem, then move to fix it by more centralization, control and dependence. It’s a trend we see not just in our energy sector, but every aspect of our lives.