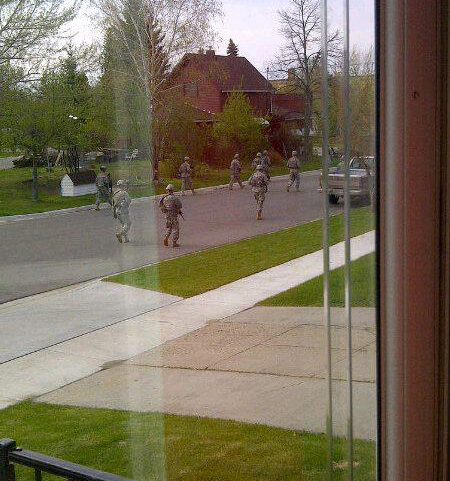 The photo shown above was taken by a subscriber in the city of Crookston, MN from the front porch of her suburban home.  No, the men pictured aren’t from the local high school’s J.R.O.T.C sqaud – they are in fact trained soldiers serving in the Minnessota National Guard, Unit 2-136 CAB / B Company. Now, I have never personally been to Crookston (although I’m sure it’s lovely), but I’m relatively confident that they are located on domestic soil, and unless I am missing something, the citizens of Crookston weren’t dealing with any natural disaster at the time this haunting snapshot into the coming police state was taken.

No, what was actually going on that morning was a “training exercise” involving a quiet neighborhood that probably isn’t that different from your own. Being the patriot that she is, Maggie decided it might be a good idea to start asking some questions. Nothing too difficult, mainly just what the hell they were doing walking fully armed down a street regularly used to facilitate the innocent pastimes of all American kids.

Glancing at her briefly one Soldier responded, “Just training Ma’am. Joining up with another patrol at the rally point.”

Not accepting this as a reasonable answer to her inquiry, Magge went on, “Oh, ok. What are you training on the streets of town for exactly?”

At that the young soldier replied, “To be honest ma’am, I don’t know.”

The reason for his domestic training exercise that morning might be unknown to him, but sadly this is not only just another indicator of the uncertain times ahead, but also a revealing indicator of how worried the Feds are of a possible outbreak of civil insurrections across the nation. 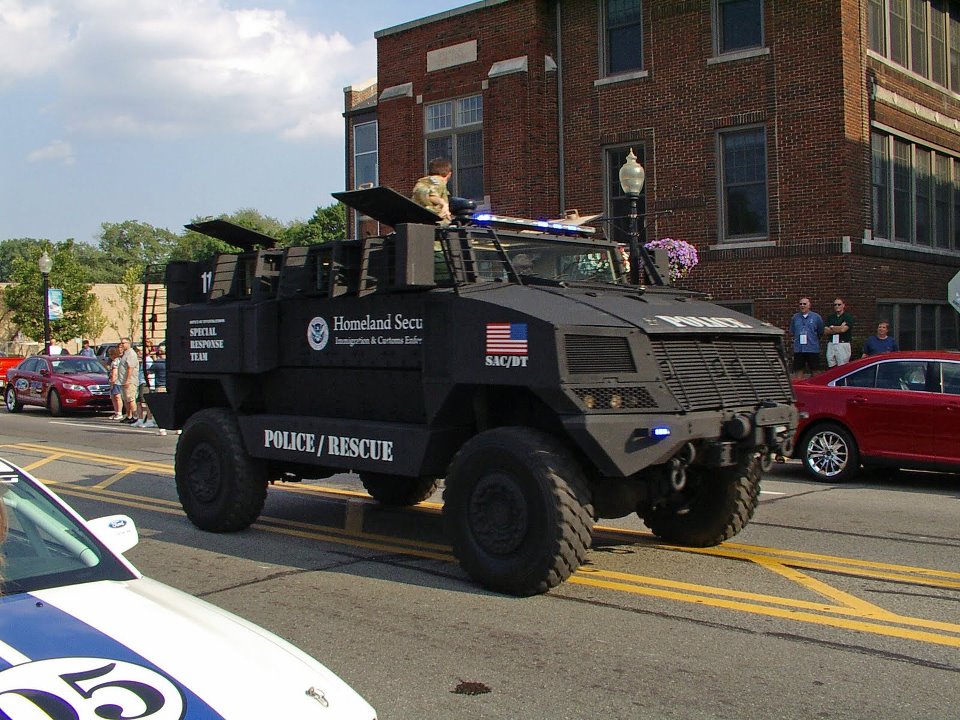 A few weeks back, I wrote a short piece detailing a few disturbing government purchases, including 450 million rounds of hollow point bullets (keep in mind the total population of the U.S. is 311,591,917), reinforced vehicle check-points, and hundreds of armored ‘civil-tanks’ by the Department of Homeland Security. Around the same time, the U.S Army was stockpiling anti-radiation pills and our President was issuing executive orders that essentially would eliminate the requirement of an actual emergency to declare Martial Law and seize any goods or property it deems necissary including authorizing forced labor of the citizens.

With this recent development, it is becoming increasingly apparent that a violent scenario has the potential of manifesting in the country I love – the country I would give my life to preserve for my younger countrymen, and since hollow point bullets are specifically designed to kill, the state has made its’ position alarmingly clear.

Well let me make myself clear: I would gladly die on my feet rather than live on my knees.