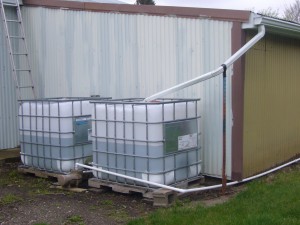 If you think you own the right to water that falls on your own property, you could be mistaken.

States such as Utah, Colorado and Washington (more on the various laws later) have had laws on the books limiting property owners from collecting the water falling on their own homes and land since officials say the rain belongs to someone else.

In 2008, Mark Miller of Mark Miller Toyota in Utah, found out some startling information.

In order to make his dealership more environmentally friendly, Miller began collecting rainwater on top of his building in cisterns in order to wash cars with it.

However, state officials said without a valid water right, Miller could not legally divert rainwater.

“I was surprised, we thought it was our water,” Miller said in a news interview.

In the same interview, a state official eluded to the fact that it’s an old legal concept to protect people that have water rights.

Yep that’s right, even with a natural occurrence such as rain, one could technically say it’s being turned into a commodity.

What’s next, state officials saying those who have a garden on their property can no longer garden unless they pay a dirt tax? Just consider how this can be expanded into different areas including air, plants, etc. and I guarantee you will come to some troubling conclusions.

A compromise in this case was, thankfully, reached.

Miller would be using a Salt Lake City water right, and diverting it under their name.

More on this story can be seen in the below video:

Despite the hurdles Miller had to go through to reach a comprise with the state as to water rights, Miller did win a Gold LEED certification.

According to the article, Utah buildings deemed eco-friendly, energy-efficient, appearing in The Salt Lake Tribune on July 13, 2009, writer Steven Oberbeck not only explains the LEED award, but elaborates on how environmentally friendly Miller’s dealership is.

“LEED stands for Leadership in Energy and Environmental Design. It is a program of the nonprofit U.S. Green Building Council that provides an independent third-party verification that a building was constructed in an environmentally responsible fashion, and is a healthy place to work.”

Imagine that, non-profit and private entities coming together (which exemplifies limited government) could actually help the environment.

What makes Miller’s dealership worthy of the award?

“‘It was always our goal to achieve a Gold LEED certification,’ Miller said. ‘Although if I had known at the time what was going to happen to the economy (and the automobile business), I might have thought a second time about making the investment.’”

Now that we know the story, its pertinent to illustrate other state laws.

The information below comes from the National Conference of State Legislators, which “is a bipartisan organization that serves the legislators and staffs of the nation’s 50 states, its commonwealths and territories. NCSL provides research, technical assistance and opportunities for policymakers to exchange ideas on the most pressing state issues. NCSL is an effective and respected advocate for the interests of state governments before Congress and federal agencies.”

Arizona has a tax credit for water conservation systems that includes collection of rainwater; however, the credit is slated to expire on Jan. 1, 2012. The credit is equal to 25 percent of the cost of the system. The maximum credit in a taxable year may not exceed $1,000. From 2007 to 2010, over $360,000 has been credited to homeowners that purchased some sort of water conservation system. Arizona Revised Statutes §43-1090.01

Colorado had some of the strictest laws in the nation prohibiting rainwater harvesting. In 2009, two laws were passed that loosened restrictions.

Ohio allows rainwater harvesting, even for potable purposes. Private water systems that provide drinking water to fewer than 25 people are regulated by the Ohio Department of Health (ODH). Ohio also has a Private Water Systems Advisory Council within the ODH. The nine member council is appointed by the governor with the advice and consent of the Senate. Ohio Revised Code §3701.344 and Ohio Revised Code §3701.346

Senate Bill 79, passed in 2009, directs the BCD to increase energy efficiency, by including rainwater harvesting, in new and repaired buildings.

The Texas Manual on Rainwater Harvesting provides information on the practice and outlines sales tax exemptions at the state and local level (pg. 53).

In 2005, the legislature ordered the creation of a Texas Rainwater Harvesting Evaluation Committee; see here for its 2006 Report to Texas Legislature with Recommendations.

The Texas Water Development Board sponsors the Texas Rain Catcher Award to advance the technology, educate the public, and to recognize excellence in the application of rainwater harvesting systems in the state.

In 2001, Virginia passed Senate Bill 1416, which gave income tax credit to individuals and corporations that installed rainwater harvesting systems. “There is hereby established the Alternative Water Supply Assistance Fund to be administered by the Department to provide grants to localities to be used for entering into agreements with businesses and individuals to harvest and collect rainwater for such uses as determined necessary by the locality, including, but not limited to, irrigation and conservation.”However money has not been allocated for these purposes.

In Washington, state law allows counties to reduce rates for storm water control facilities that utilize rainwater harvesting. Rates may be reduced by a minimum of ten percent for any new or remodeled commercial building. However, the rate can be reduced more than ten percent, depending on the county. Kitsap County’s Ordinance reduces surface and stormwater fees by 50 percent. Washington Revised Code §36.89.080

Uses for harvested rainwater may include water closets, urinals, hose bibbs, industrial applications, and for irrigation purposes. Other uses may be allowed when first approved by the authority having jurisdiction. Washington Revised Code §51-56-1623

In 2009, the Washington Department of Ecology issued an Interpretive Policy Statement clarifying that a water right is not required for rooftop rainwater harvesting.

Since 1964, the U.S. Virgin Islands has required most buildings to be constructed with a self-sustaining potable water system, such as a well or rainwater collection system.
U.S. Virgin Island Code Title 29 §308

Now lets switch gears and turn our attention to pending legislation, which also comes from the NCLS site:

Even though some states are more restrictive than others with the amount of rain that can be harvested, my whole issue is if the government can still dictate who is guaranteed water rights (and water should be a basic right), then all a person may have is the privilege to collect the water, not the right.

Lastly, if present trends continue, Mike Adams (known to some as “the health ranger”) and editor of NaturalNews.com believes tyranny will transcend over the populace.

Adams elaborated in his online article, Collecting rainwater now illegal in many states as Big Government claims ownership over our water, on July 26, 2010.

“As long as people believe their rights stem from the government (and not the other way around), they will always be enslaved. And whatever rights and freedoms we think we still have will be quickly eroded by a system of bureaucratic power that seeks only to expand its control.

Because the same argument that’s now being used to restrict rainwater collection could, of course, be used to declare that you have no right to the air you breathe, either. After all, governments could declare that air to be somebody else’s air, and then they could charge you an “air tax” or an “air royalty” and demand you pay money for every breath that keeps you alive.

Think it couldn’t happen? Just give it time. The government already claims it owns your land and house, effectively. If you really think you own your home, just stop paying property taxes and see how long you still “own” it. Your county or city will seize it and then sell it to pay off your “tax debt.” That proves who really owns it in the first place… and it’s not you!

How about the question of who owns your body? According to the U.S. Patent & Trademark office, U.S. corporations and universities already own 20% of your genetic code. Your own body, they claim, is partially the property of someone else.

So if they own your land, your water and your body, how long before they claim to own your air, your mind and even your soul?

Unless we stand up against this tyranny, it will creep upon us, day after day, until we find ourselves totally enslaved by a world of corporate-government collusion where everything of value is owned by powerful corporations — all enforced at gunpoint by local law enforcement.”

Even though this article was written all the way back in 2010, the point remains just as true today as it was when it was originally published. Our right to water is still being threatened.

This is also occurring outside of the United States in many third world countries where corporations buy up all the water rights in the country, thus making it illegal for the extremely impoverished inhabitants to actually collect water that they need to survive.

The war against our right to collect water is just one of the many fronts in the federal government’s attempt to eradicate our right to private property. Let’s not forget that this is a truly global problem as well.

Do your part by standing up to this tyranny, fighting it at a local level and sharing this information so this problem can come to the attention of more people around the world.