After being told the date Obama signs the wrong year in the guestbook at Westminster Abbey. 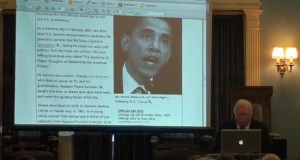 The video down below is a must-see!

Corsi wins over officials in New Jersey on eligibility

A presentation by WND’s Jerome Corsi to a standing-room-only crowd has convinced a New Jersey lawmaker and a local sheriff that the issue of President Obama’s eligibility for office “will have to be addressed.”

“The easiest way to put this to rest is to have the records unsealed,” Morris County Sheriff Ed Rochford told the Huffington Post in an email following the April 4 event in Morristown. “Mr. Corsi made a very convincing argument that President Obama may not be a natural born citizen of the United States.”

Likewise, New Jersey Assemblyman Anthony Bucco, R-Boonton, said Corsi’s speech leaves doubts about Obama’s citizenship status. He told the website it is not his place to determine whether Obama is a citizen, and he believes “a higher authority” must resolve the issue.“I am not in a position to say what he put up on screen is demonstrative of evidence; that is for the court of law,” Bucco said. “This issue has not resolved itself. It won’t until some higher authority is involved.”

The evening was organized by Billy Baer and Dan Haggerty, who cohost the radio program “The Baer Haggerty Offensive” on Repatriot Radio broadcast on WNJC 1360 AM in Philadelphia. Corsi told a crowd of 250 people: “The mainstream media has not given this fair treatment. But this is not going away. We really don’t know who our president is.”

Presenting research from “Where’s the Birth Certificate?” and utilizing a MacBook to show documents on a screen, Corsi used Abode Illustrator software to separate the layers of the document released by the White House and zoomed in on irregularities that show the document is a “bad forgery.” In his presentation, he provided evidence of inconsistencies between Hawaii health officials’ statements that there was no long-form birth certificate and Obama’s release of the purported certificate, and discrepancies concerning the name of the hospital where Obama was said to have been born. Corsi reported that Obama may be using a fraudulent Social Security number. He explained the evidence suggests Obama’s Selective Service documentation is not genuine, and he also discussed the topic of Obama’s school transcripts – which have yet to be released.

“There were many other talking points that I can say raised ‘a red flag,’” Sheriff Rochford said after the event.

According to the report, Bucco said he wouldn’t oppose a requirement that presidential candidates provide evidence of citizenship before getting on the New Jersey ballot.

“I think everyone should be able to provide something that shows citizenship,” Bucco added.

Meanwhile, Bucco warned that the eligibility issue will not simply disappear.

“He’s sitting in the Oval Office and he’s running again,” he said. “Based on the information that this gentleman put out, it’s not going away. This will have to be answered at some time. It will have to be addressed.”

The following is a video of Corsi’s presentation: