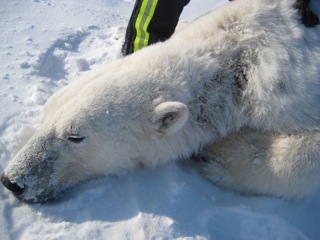 Biologists have found Polar Bears in the Beaufort Sea with hair loss and skin lesions. Those are the same symptoms that have sickened ice seals and walruses in the arctic since last summer and led the federal government to declare the incident an unusual mortality event. Scientists are just beginning an investigation into whether polar bears are suffering from the same thing.

“The first day we observed it was on March 21st and we had three captures and two of them had Alopecia, which is the skin loss and so it was like, ‘oh that’s interesting.’ Then we started picking it up on other animals in later march so it was like, this is more than normal.”

So far, the field scientists have found hair loss on nine of the 33 bears they’ve captured. The bears have skin lesions on their head, neck and ears. Degange says they have found polar bears with similar symptoms since 1999, but the number of effected bears makes this year unusual:

“The bears appear to be healthy otherwise. We haven’t seen any dead bears, so its not a mortality event as far as we know. But the fact that its occurring at the same time as this unexplained mortality event with seals certainly raises the interest level.”

The biologists collected blood and tissues from the affected bears to try to figure out if the symptoms are related to the mysterious illness that has been found in ice seals and walruses. Dozens of seals have died from the disease, but no walrus deaths are attributed to it. Scientists don’t know yet if the walrus and seals are suffering from the same thing. Although the veterinary pathologist who has done most of the necropsies on the animals say the lesions look very similar under the microscope. Julie Speegle is a spokesperson for the National Marine Fisheries Service. She says its been a difficult case:

“We still don’t know what is causing the disease. But our scientists have ruled out a number of bacteria and viruses that are known to affect marine mammals.”

Speegle says the latest tests to turn up negative were for two toxins that can cause harmful algae blooms.

“So just a couple more possible causes of illness that we have ruled out and we continue to go forward with studying samples and trying to find out what is causing this disease.”

Polar Bears will not be included as part of the Unusual Mortality Event until there is a lot more evidence linking the illnesses. Polar Bears were listed as a threatened species under the Endangered Species Act in 2008. But Tony Degange, with USGS, says the agency would put a high priority on understanding what’s causing the symptoms with or without the listing:

“Polar bears are an iconic species in the arctic. They’re a subsistence resource to the natives on the north slope. And I don’t think we’re giving them more special attention because they’re listed than otherwise.”

Degange says out of four polar bears biologists captured yesterday, three had skin lesions and hair loss. The crew is now moving farther west along the Beaufort Sea coast- near Prudhoe Bay so they’ll have a chance to see if the illness is as widespread in that area.