The last time we plotted European youth unemployment in what was dubbed “Europe’s scariest chart” we were surprised to discover that when it comes to “Arab Spring inspiring” youth unemployment, Spain was actually worse off than even (now officially broke) Greece, whose young adult unemployment at the time was only just better compared to that… of the United States. Luckily, following the latest economic (yes, we laughed too) update from Greece, it is safe to say that things are back to normal, as Greek youth unemployment is officially the second one in Europe after Spain to surpass 50%. In other words, Europe’s scariest chart just got even scarier. 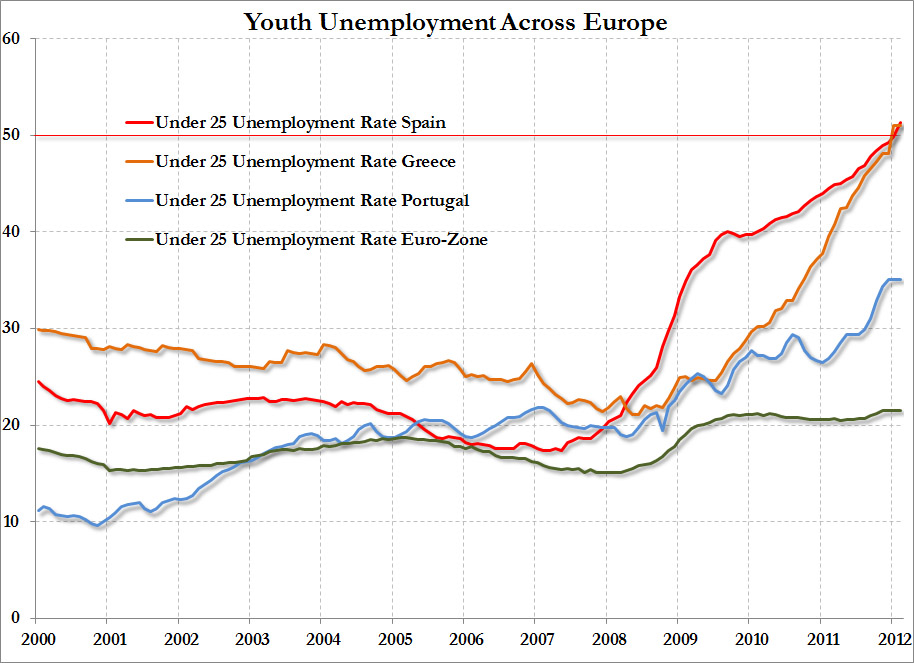 And so while the Greek economy is in tatters, following another downward revision to its GDP as reported last week, this time dragging Q4 GDP from -7.0% to -7.5%, that’s only the beginning, and it now appears that a terminal collapse of not just the Greek financial sector, but its society as well, has commenced, as the number of people unemployed in the 11 million person country is now 41% greater than its was a year ago. From Athens News:

The average unemployment rate for 2011 jumped to 17.3 percent from 12.5 percent in the previous year, according to the figures, which are not adjusted for seasonal factors.

Youth were particularly hit. For the first time on record, more people between 15-24 years were without a job than with one. Unemployment in that age group rose to 51.1 percent, twice as high as three years ago.

Budget cuts imposed by the European Union and the International Monetary Fund as a condition for dealing with the country’s debt problems have caused a wave of corporate closures and bankruptcies.

Greece’s economy is estimated to have shrunk by a about a fifth since 2008, when it plunged into its deepest and longest post-war recession. About 600,000 jobs, more than one in ten, have been destroyed in the process.

Things will get worse before they get better, according to analysts. “Despite some emergency government measures to boost employment in early 2012, it is hard to see how the upward unemployment trend can be stabilised in the first half of the year,” said Nikos Magginas, an economist at National Bank of Greece.

When will the Greeks ask themselves if the complete and utter destruction of their society is worth it, just to pretend that life as a European colony is worth living. Especially now that pension funds have been vaporized?